Kurdish administration said Turkey had resorted to their use because of unexpectedly stiff resistance by Kurdish fighters. 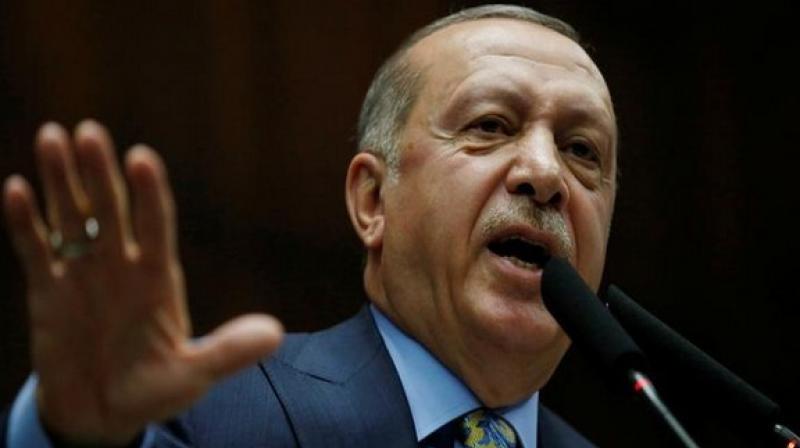 Turkish President Recep Tayyip Erdogan has so far ignored international pressure to halt the offensive, which has killed dozens of civilians and displaced more than 3,00,000 people. (Photo: File | ANI)

Beirut: The embattled Kurdish authorities in northeastern Syria on Thursday accused Turkey of resorting to banned weapons such as napalm and white phosphorus munitions.

The use of such weapons since the start of the cross-border assault by Turkey and its Syrian proxies could not immediately be confirmed independently.

In a statement issued eight days into the deadly offensive, the Kurdish administration said Turkey had resorted to their use because of unexpectedly stiff resistance by Kurdish fighters in the key border town of Ras al-Ain.

"The Turkish aggression is using all available weapons against Ras al-Ain," the Kurdish statement said.

Turkish President Recep Tayyip Erdogan has so far ignored international pressure to halt the offensive, which has killed dozens of civilians and displaced more than 300,000 people.

"Faced with the obvious failure of his plan, Erdogan is resorting to weapons that are globally banned such as phosphorus and napalm," the statement added.

The Syrian Observatory for Human Rights, a Britain-based monitoring group with a wide network of sources on the ground, could not confirm the use of napalm or white phosphorus.

But Observatory chief Rami Abdel Rahman said there had been a spike in burn wounds over the past two days, mostly casualties brought in from the Ras al-Ain area.

Kurdish officials posted a video on social media showing children with burns one doctor in Hasakeh province argues are consistent with the use of banned weapons.

Made notorious by their widespread use by US forces in the Vietnam War, napalm and related chemicals are mixtures of a gelling agent and a volatile petrochemical used in incendiary bombs.

White phosphorus can be used to create a smoke screen or as a battlefield marker, but it can also be deployed as a deadly incendiary weapon, a use prohibited under international law.

A spokesman for the Syrian Democratic Forces -- the autonomous Kurdish region's de facto army -- called on international organisations to send in experts.

"We urge international organisations to send their teams to investigate some wounds sustained in attacks," Mustefa Bali said on social media.