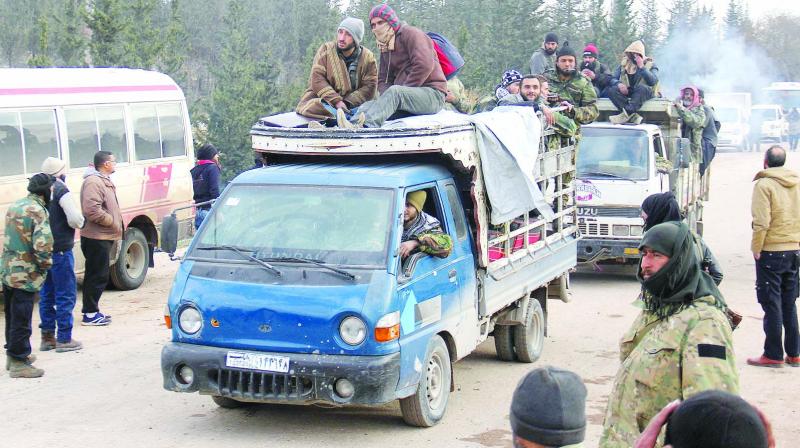 Aleppo: The Syrian government suspended the evacuation of civilians and fighters from the last rebel-held parts of Aleppo on Friday leaving thousands of people trapped and uncertain of their fate.

Russia, which helped to broker the evacuation deal with Turkey, said its operation was now “complete” with all women and children moved from the city.

Ankara and a Syrian military source said the evacuation had been suspended but was not yet over. “The evacuations are not over and many people still want to leave the area,” said Turkish foreign minister Mevlut Cavusoglu.

Amid the confusion, a convoy of evacuees that had already left the east when the operation was suspended was forced to return and re-enter rebel territory, an AFP correspondent said.

The delicate operation to bring the last civilians and rebels out of east Aleppo began on Thursday and had continued through the night, with thousands of people leaving in buses and ambulances.

But on Friday morning it was abruptly suspended, with the government accusing rebels of violating the terms of the deal.

“The evacuation operation has been suspended because the militants failed to respect the conditions of the agreement,” a security source told AFP. State television said: “The terrorist groups violated the agreement and tried to smuggle heavy weapons and hostages from east Aleppo.” The International Committee of the Red Cross confirmed it was on hold.

The opposition accused the government of suspending the operation in a bid to secure the evacuation of residents from two villages under rebel siege. “The regime and its militias... stopped the evacuation operation in another attempt to involve Fuaa and Kafraya,” said Yasser al-Youssef of the Nureddin al-Zinki rebel group. Fuaa and Kafraya are Shiite-majority villages in Idlib province.