World   Europe  19 Mar 2019  Under a new Russian law, you could land in jail if you insult Vladimir Putin
World, Europe

Under a new Russian law, you could land in jail if you insult Vladimir Putin 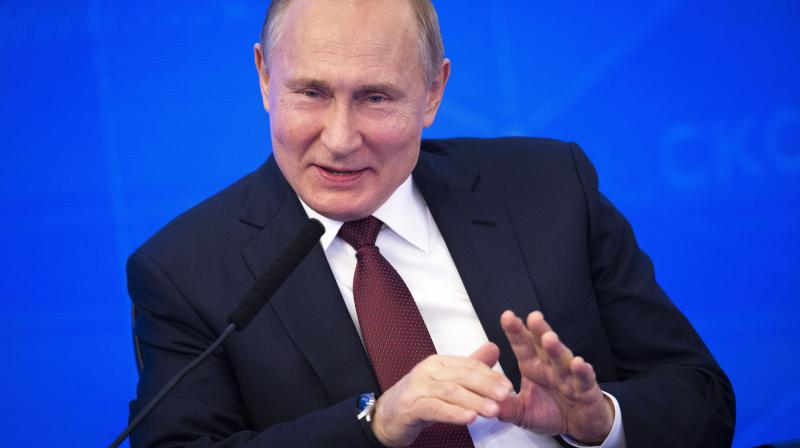 Websites that fail to comply would be blocked. (Photo:AP)

Putin signed off on the legislation against the advice of human rights activists, who warned the laws amounted to censorship and would be abused to further crack down on freedom of speech.

The law on disrespecting authorities backs punishment for "offending state symbols" and stipulates hefty fines and jail terms of 15 days for repeat offenders.

Another piece of legislation allows authorities to decide what amounts to "fake news" and gives a media watchdog the power to demand an outlet delete the information.

Websites that fail to comply would be blocked.

Fines could reach 1.5 million rubles (over USD 22,700) if the infraction leads to grave consequences like death or rioting.

Rights activists say that since first becoming president in 2000, Putin has gradually crushed freedoms in Russia, muzzling critics and bringing television under control.

The new legislation takes the crackdown on civil society to a whole new level, they say.

Critics say the legislation is vaguely worded and would have large scope for abuse, further complicating the difficult and sometimes deadly work of rights activists and opposition journalists in Russia.

The Kremlin is stepping up media control to counter a fall in Putin's approval rating amid mounting economic trouble, according to activists.

"These new prohibitions and punishments are not just a continuation of the repressive legislative and practical measures that began in 2012," Yuri Dzhibladze, president of the Centre for the Development of Democracy and Human Rights, told AFP.

"This is a completely new level which almost literally repeats the Soviet-era law about 'activities undermining the Soviet system' and 'anti-Soviet campaigning and propaganda'."

The authorities unleashed a major crackdown on dissenters after Putin returned to the Kremlin in 2012 in the face of mass protests.

"From now it will be police that will decide what fake news is and what's not," said Alexander Cherkasov of Memorial, a top rights group.

"This will lead to a violation of civil rights and freedoms."

Moscow on Monday marked the fifth anniversary of Crimea's annexation from Ukraine, a move condemned by the West but celebrated by most Russians.

Mikhail Fedotov, the chairman of the Kremlin's human rights' council, told AFP that the legislation had "numerous flaws" and his group had asked the president to reject it.

Even the usually pliant media criticised the new laws.

"The authorities' desire to gag their subjects is a very old, shameful and meaningless desire."

In 2018, Putin was elected to a historic fourth term in office with a record vote share amid increasing international isolation.

But the 66-year-old Russian president's popularity ratings have taken a beating due to a controversial pension age hike and falling living standards as a result of tough Western sanctions over Ukraine and other crises.

Last month Russian lawmakers backed a bill that could cut off the country's internet traffic from servers abroad, which critics say is a possible step towards an isolated network like in North Korea.