‘Go back where you came from’: White man abuses pregnant black lawmaker in Georgia

She said she was so taken aback by his actions that she didn’t think to try to record them. 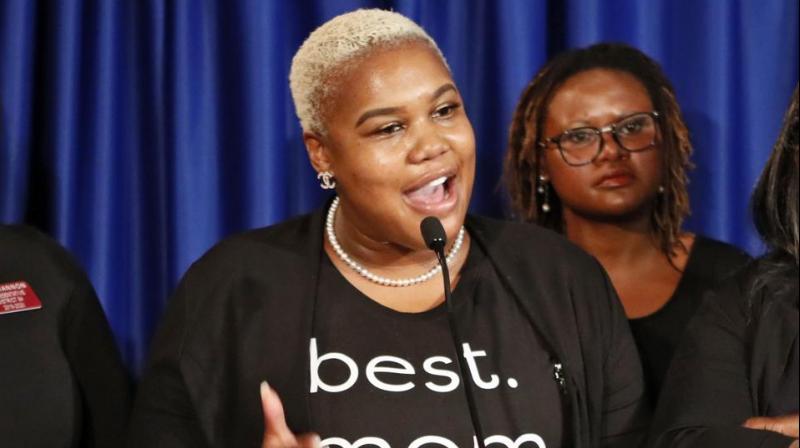 In this May 7, 2019 file photo Rep. Erica Thomas, D-Austell, speaks during a news conference in Atlanta. Thomas says she was verbally attacked in a supermarket by a white man. (Photo: AP)

Mableton: A pregnant African American lawmaker in Georgia said she was verbally attacked in a supermarket Friday by a middle-aged white man who used profanity, called her vulgar names and told her to “go back where you came from” as her nine-year-old daughter looked on.

Rep. Erica Thomas, a Democrat from Austell, said the man was irate that she was in an express line with too many items. Thomas said she was in a line for customers with 10 items or less because she cannot stand for long periods of time.

Thomas said she was stunned by his anger. “I said, ‘Sir, you don’t even know me. I’m not lazy. I’m nine months pregnant.’“

Thomas said she never identified herself to the man as a public official. She said she was so taken aback by his actions that she didn’t think to try to record them.

The incident came days after President Donald Trump tweeted that four congresswomen of color, including US Rep. Ilhan Omar of Minnesota, should go back to the “broken and crime infested” countries they came from.

In Thomas’ video, she alludes to Trump’s attacks on Omar. Thomas never mentions Trump’s name but says, “There’s so much hate in this world and it’s being incited by our president every single day.”

Thomas told The Associated Press that it appeared the man had already paid for his groceries when he approached her.

“He ran up on me and just verbally assaulted me,” she said in the AP interview. At one point, Thomas said, the man told her “You people are ignorant.”

Thomas said a store employee at some point approached the man and told him to leave. She said she believes store employees were slow to respond to the assault.

She said the incident happened at a Publix store in Mableton. A phone and email message requesting comment from Publix in Georgia did not receive an immediate response Friday evening.

Thomas told the AP she notified police and that she would seek store video of the incident.