It is the 11th German submarine from the 1914-18 war to be found in Belgian waters and the best-preserved example to date. 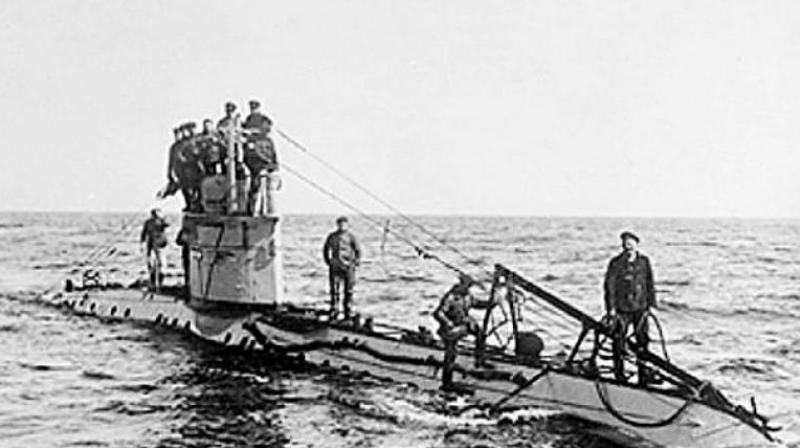 The submarine would have had 22 crew and a commander on board. (Photo: Wikimedia Commons)

Brussels/Belgium: Divers have found a well preserved wreck of a German submarine sunk during World War I in the North Sea which may have the bodies of its crew still on board, Belgian officials said Tuesday.

A diver who has explored the wreck, lying in 30 metres (100 feet) of water off the port of Ostend, said the good condition of the submarine suggested the remains of its 23 crew could still be inside.

It is the 11th German submarine from the 1914-18 war to be found in Belgian waters and the best-preserved example to date, Thomas Termote, a diver and expert in marine archaeology who found the wreck this summer, told AFP.

"We thought that all the big wrecks had already been discovered so this was a total surprise," Termote told AFP.

Its exact location is being kept secret to deter treasure-hunters.

He said the wreck - a UB-II type torpedo armed boat - was 27 metres (yards) long with the rear end partly detached.

"The submarine is very intact, everything is still closed - that's what he (Termote) saw during his first visit this summer," Jan Mees, head of the Flanders Marine Institute said.

The submarine would have had 22 crew and a commander on board, West Flanders provincial governor Carl Decaluwe told De Standaard newspaper.

"All the hatches are still closed. This suggests the wreck has not been discovered before and moreover the 23 crew members are still inside," Decaluwe said.

The German embassy in Belgium had been informed, Belga news agency reported.

During World War I, the German navy used the Belgian port of Zeebrugge as a base for its submarines, known as U-boats, to attack shipping in the North Sea.

To combat the U-boat threat, the British tried to block Zeebrugge port in April 1918 by scuttling old ships in the entry channel.

The first indications of the wreck came in 2015 when a sonar ship found signs of a large wreck off Ostend in 2015.

Termote, who lives in the town, carried out further investigations on his own initiative.

A further dive is planned soon to clean some of the outside and check its identification number, Mees said.

German authorities could then check it against their record and contact the families of the deceased.

"If the Germans want to get the bodies back it's possible, but highly unlikely," Mees added.

Termote said the wreck would be "nearly impossible" to refloat and would therefore be "considered a sea grave for the sailors."

Germany lost around 1,200 men in 70 U-boats off the Belgian coast during four years - out of a total of 93 stationed in Flanders.

Its base was in the medieval city of Bruges, 12 kilometres from the coast but linked to the sea at Ostend and Zeebrugge by canals.

Termote, 42, was introduced to diving by his father, an Ostend hotelier. The pair have since carried out 5,000 dives in the North Sea.