Prof. Boris Wilke, a senior researcher and political scientist claimed that 'terrorism is a strategy and not a creed.' 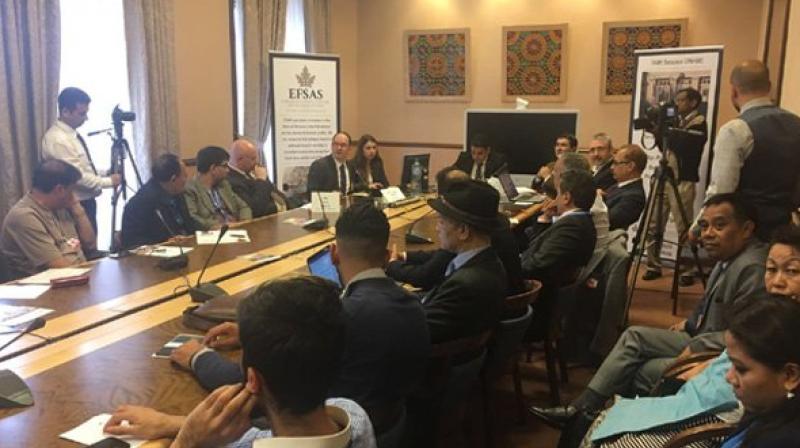 A panel of experts at the United Nations has said that Pakistan has resorted to using 'Jihad' and terror organisations to further its foreign policy goals in places like Jammu and Kashmir. (Photo: ANI)

Geneva (Switzerland): A panel of experts at the United Nations has said that Pakistan has resorted to using 'Jihad' and terror organisations to further its foreign policy goals in places like Jammu and Kashmir.

"In the case of Jammu and Kashmir, Pakistan, which is barely able to sustain itself, has always raised the stakes by embarking on 'Jihad' as a foreign policy in order to manoeuvre and force a favourable outcome and keeps exercising this as a state policy to this very day," Burzine Waghmar, of the University of London's School of Oriental and African Studies, SOAS South Asia Institute and Centre for the Study of Pakistan, said.

Waghmar argued that the Composite Dialogue Process, thanks to Mumbai 26/11, is pretty much composite for which Kashmiris have much to be embittered about and should blame Pakistan for in this case.

"India's men in uniform face intense scrutiny in Kashmir; the Pakistani Army enjoys a far freer hand decimating whole villages across the North West Frontier Province (NWFP) and Balochistan. The Hurriyat Conference and especially its hard-line leader, Syed Ali Shah Geelani, should pause to reflect and commiserate with those distraught Baloch relatives who discover mutilated corpses by roadsides stuffed with faeces in their mouth as part of the Pakistani's deep state's pick up and dump routine," Waghmar stressed predominantly on the Jammu and Kashmir issue, during his speech at the event organised by the European Foundation for South Asian Studies (EFSAS), a policy research institution based in Amsterdam, held a side-event on "Terrorism in South Asia" during the 36th Session of the UN Human Rights Council in Geneva.

Waghmar continued by saying that the "stunning silence of Pakistanis particularly, or Muslims generally that matter, vindicates the sordid truism that they are selectively animated by outrages visited upon Muslims."

While defining terrorism, Prof. Boris Wilke, a senior researcher and political scientist claimed that "terrorism is a strategy and not a creed."

Prof. Wilke explained how in South Asia promoting sectarianism and outsourcing military power as strategy has led to the growth of religious extremism, which has eventually resulted in proxy wars which are a threat to global peace.

Wilke added that "Jammu and Kashmir is an example in this regard."

He further stated that Pakistan's friendship with China is based on Realpolitik and not Moralpolitik. He ended his speech by emphasising that developing localised and regionalised peace-justice equilibria between South Asian countries has become a necessity for global peace.