The 22-year-old Moroccan is believed to be the last remaining member of a 12-man cell still at large in Spain or abroad. 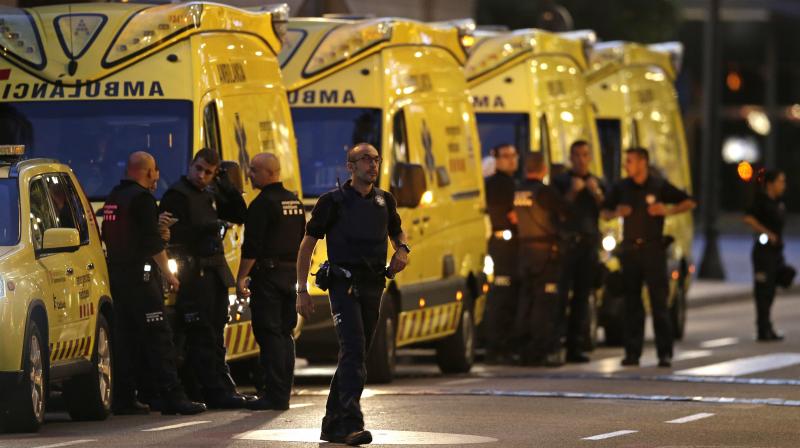 Police had fired at the car when it forced the checkpoint, injuring an officer (Photo:AP)

Barcelona: The death toll in Spain's terror attacks has risen to 15, Catalonia's regional minister Joaquim Forn said Monday, as a man found stabbed dead in a car outside Barcelona was linked to the case.

"We are raising the number of victims from 14 to 15 to include the victim in the vehicle found in Sant Just," he told journalists.

The victim was identified as Pau Perez, a Spaniard from Vilafranca del Penedes, some 65 kilometres (40 miles) from Barcelona.

He was found fatally stabbed in a Ford Focus that had forced a police checkpoint Thursday just after a van ploughed through crowds in Barcelona's Las Ramblas boulevard, killing 13 people.

Police had fired at the car when it forced the checkpoint, injuring an officer, and initially thought the man they found in the car had been killed by the gunfire.

Meanwhile, Spanish police said they had identified the driver of a van that mowed down pedestrians in Barcelona as a manhunt for the suspect believed to be a Moroccan national widened across Europe.

Police in Catalonia said on Twitter they knew who the driver was without naming him, but regional interior minister Joaquim Forn said in a radio interview that "everything suggests the van driver is Younes Abouyaaqoub."

The 22-year-old Moroccan is believed to be the last remaining member of a 12-man cell still at large in Spain or abroad, with the others killed by police or detained over last week's twin attacks in Barcelona and the seaside resort of Cambrils that claimed 14 lives, including a seven-year-old boy.

Spanish authorities were officially notifying European police Monday of the identity of the suspect to enable the launch of a Europe-wide manhunt.

"We have to talk to European police to notify them of the identity because this person... is likely being sought in all European countries," Forn said.

Investigators seeking to unravel the terror cell have homed in on the small border town of Ripoll, at the foot of the Pyrenees mountains.

Several of the suspects including Abouyaaquob grew up or lived in the town.

A Moroccan imam, Abdelbaki Es Satty, aged in his 40s, has also come under scrutiny as he is believed to have radicalised youths in Ripoll.