Two officers found him hiding in a nearby vineyard and asked for his identification, according to the head of the Catalan police. 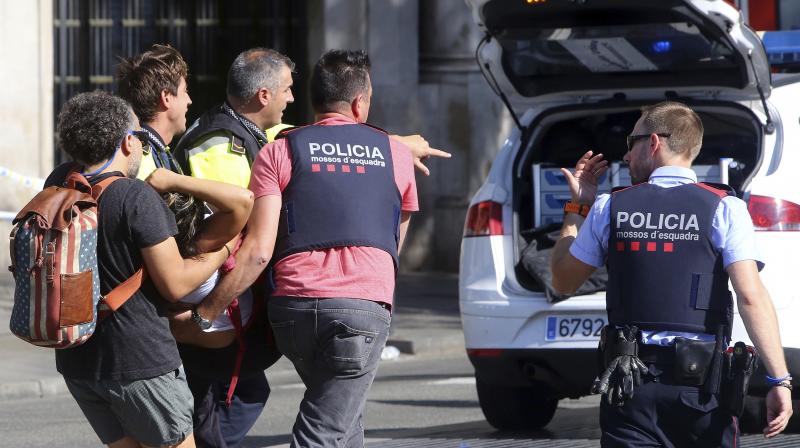 An injured person is carried in Barcelona, Spain, after a white van jumped the sidewalk in the historic Las Ramblas district (Photo: AP)

Subirats: The lone fugitive from the Spanish cell that killed 15 people in and near Barcelona was shot to death Monday after he flashed what turned out to be a fake suicide belt at two troopers who confronted him in a vineyard just outside the city he terrorized, authorities said.

Police said they had "scientific evidence" that Younes Abouyaaqoub, 22, drove the van that barreled through Barcelona's crowded Las Ramblas promenade, killing 13 people on Thursday, then hijacked a car and fatally stabbed its driver while making his getaway.

Abouyaaqoub's brother and friends made up the rest of the 12-man extremist cell, along with an imam who was one of two people killed in what police said was a botched bomb-making operation.

After four days on the run, Abouyaaqoub was spotted outside a train station west of Barcelona on Monday afternoon. A second witness told police she was certain she had seen the man whose photo has gone around the world as part of an international manhunt.

Two officers found him hiding in a nearby vineyard and asked for his identification, according to the head of the Catalan police. He was shot to death when he opened his shirt to reveal what looked to be explosives and cried out "Allah is great" in Arabic, regional police chief Josep Luis Trapero said.

A bomb disposal robot was dispatched to examine the downed suspect before police determined the bomb belt was not real, Trapero said. A bag full of knives was found with his body, police said.

A police photo of the body seen by The Associated Press showed his bloodied face, bearing several days' stubble on the chin.

"The arrest of this person was the priority for the police because it closed the detention and dismantling of the group that we had identified," he said.

Four are under arrest, and eight are dead: five shot by police in the seaside town of Cambrils, where a second van attack left one pedestrian dead early Friday; two others killed on the eve of the Barcelona attack in a botched bomb-making operation; and Abouyaaqoub.

The Islamic State group has claimed responsibility for both the Cambrils and Barcelona attacks.

Roser Ventura, whose father owns a vineyard between the towns of Sadurni d'Anoia and Subirats, said she alerted the regional Catalan police when they spotted a car crossing their property at high speed.

"The police told us to leave the premises and go home. We heard a helicopter flying around and many police cars coming toward the gas station that is some 600 meters from the property," Ventura said.

The search for Abouyaaqoub ended on the same day that Catalan police confirmed that he was the last remaining cell member thought to still be at large and provided a timeline of his movements.

Authorities said earlier Monday they had evidence that pinpointed Abouyaaqoub as the driver of the van that plowed down the Las Ramblas promenade, killing 13 pedestrians and injuring more than 120 others.

Trapero said that after abandoning the vehicle, Abouyaaqoub walked through Barcelona for about 90 minutes, through the famed La Boqueria market and nearly to Barcelona University.

In a parking lot often used by university students, he then hijacked a Ford Focus belonging to Pau Perez, stabbing Perez to death and taking the wheel with his final victim's body in the backseat. Minutes later, Abouyaaqoub plowed through a police checkpoint with the stolen car and abandoned the vehicle, disappearing into the night.

The manhunt for him reached well beyond Spain's borders, but in the end, Abouyaaqoub died about 30 kilometers (18 miles) from where he was last spotted.

After the carnage in Barcelona, authorities took a closer look at an explosion the night before in a house south of the city. Police initially had dismissed it as a household accident.

Along with two bodies, the more exhaustive search turned up remnants of over 100 butane gas tanks and materials needed for the TATP explosive, which has been used previously by Islamic State militants for attacks in Paris and Brussels, among others.

The equipment, along with reports that Abouyaaqoub had rented three vans, suggested the militant cell was making plans for an even more massive attack on the city.

Family and friends of the young men, nearly all with roots in Morocco, described them as well-integrated members of the community in Ripoll, a quintessentially Catalan town nestled into the foothills of the Pyrenees.

"I knew everyone implicated in the attacks. These were people who avoided problems, kept their distance when they saw a fight," Saber Oukabir, a cousin of two of the attackers, said.

The group members started spending time with the imam who police think was their ideological leader about six months ago, Oukabir said. "I don't know what could have happened, if he manipulated them, if he drugged them or what."

Fernando Reinares, director of the program on global terrorism at Spain's Elcano Royal Institute, said imams such as Abdelbaki Es Satty have made strong inroads into the region's community of North African immigrants, often reaching their Spanish-born children.

"He successfully exploited the dense, overlapping, pre-existing kinship, friendship and neighborhood ties between these young Muslims," Reinares said in an email to The Associated Press. "One of the reasons why Catalonia is the main scenario for both jihadist radicalization and involvement in the whole of Spain is certainly related to the extraordinary, unparalleled concentration in the region of Salafist congregations and imams, such as Es Satty."

Regional authorities said Monday that 48 people were still hospitalized from the attacks in Barcelona and Cambrils, eight of them in critical condition.

Catalonia's regional president, meanwhile, said regional and local authorities had rejected the Spanish government's suggestion to place traffic barriers to protect the Las Ramblas promenade because they deemed them "inefficient."

Carles Puigdemont told La Sexta television the barriers wouldn't have prevented vehicles from entering the promenade at other points - and he said closing off Las Ramblas was impractical because emergency vehicles still needed access.

On Monday, crowds of people continued to lay flowers, candles and heart-shaped balloons at the top of the pedestrian promenade where the van struck and at other smaller tributes.

Las Ramblas also regained some normality, with throngs of people walking up and down, tourists arriving and residents going about their daily business.

"We have to stand strong in front of these betrayers, assassins, terrorists," said resident Monserrat Mora. "Because Barcelona is strong and they will not be able to prevail with us."