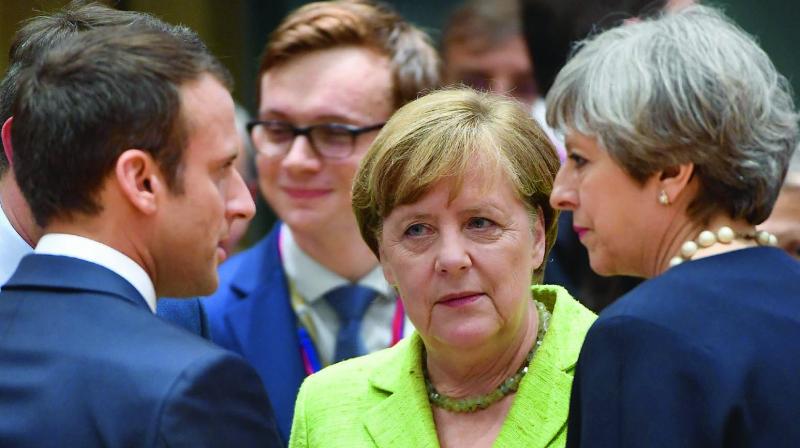 Under intense pressure on all sides since losing her majority, Ms May said her task at the Brussels summit would be to set out her plans to protect EU citizens’ post-Brexit rights.

But Ms Merkel, Europe’s most powerful leader, made clear that this was not at the top of her agenda as she reaffirmed Berlin’s strong ties with France and its newly elected President Emmanuel Macron.

“For me the shaping of the future of the 27 is a priority coming before the issue of the negotiations with Britain on the exit,” Ms Merkel said.

“We want to conduct these negotiations in a good spirit but the clear focus has to be on the future of the 27.”

Mr Macron, attending his first summit, did not mention Brexit directly but said it was now time to get down to concrete work — “hand in hand with Germany” — on putting the European Union back on track after years of austerity and crisis.

Britain’s vote to leave the EU exactly a year ago on Friday was the biggest in a series of shocks that the bloc has faced, but it now insists it is turning the corner on anti-EU sentiment.

Ms May is set to brief EU leaders on her Brexit plans over dinner on Thursday, before being kicked out while the remaining 27 discuss key issues including the future location of the EU’s medicines and banking agencies, currently based in Britain.

For her part, Ms May said she would set out “clearly how the UK proposes to protect the rights of EU citizens in the UK and see the rights of UK citizens living in Europe protected.”

“That’s been an important issue, we’ve wanted it to be one of the early issues that was considered in the negotiations, that is now the case, that work is starting,” she said as she arrived. Ms May had previously refused to guarantee the rights of EU citizens in Britain until those of expatriate Britons were secured.