Tourism was perceived as Barcelona's biggest problem according to a recent survey carried out by the city council. 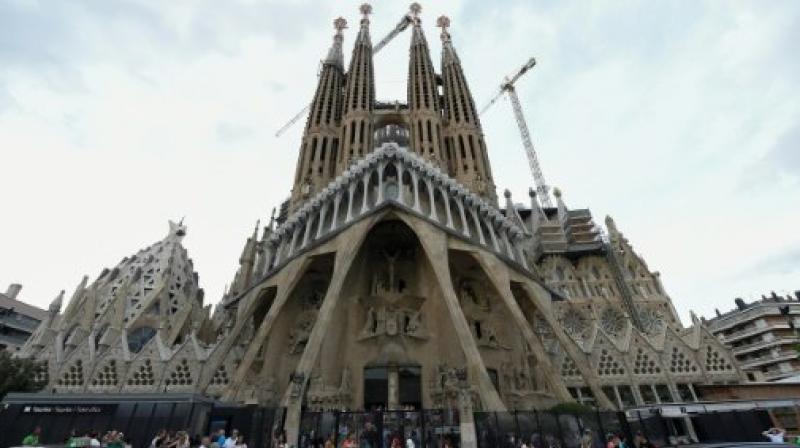 Barcelona, with its pristine beaches and eccentric architecture, attracts around 30 million visitors each year. (Photo: AFP)

Barcelona: A tourist magnet in Spain, adored for its beaches and architecture, Barcelona is working to reassure future visitors in the hope that last week's bloody rampage won't impact a key sector for its economy.

Rooms are scarce and prices are sky-high next week due to the expected arrivals of some 30,000 doctors for a cardiology congress on August 26-30.

The tourism sector sees the event as its first test since the twin vehicle attacks carried out in Barcelona and the nearby seaside resort of Cambrils that killed 15 people and wounded more than 120. "There's some anxiety because (the attacks) are obviously not a positive point," said Jose Luis Zoreda, executive vice-president at industry lobby group Exceltur.

But he said he did not expect "any catastrophe" for the sector. The attacks claimed by the Islamic State group came in the peak tourist season. Nine of those killed were tourists and the injured include people from 35 different nationalities.

Last year the Mediterranean city's 1.6 million residents were heavily outnumbered by an estimated 30 million visitors, a significant number of them day-trippers. Some nine million people stayed in city's over 400 hotels last year. The tourism sector accounts for 12-14 percent of the city's gross domestic product.

Barcelona's success in drawing visitors has sparked a backlash from locals in some areas who complain that crowds of drunken, rowdy tourists packed into cheap rental properties have been making their lives hell and driven up prices.

Tourism was perceived as Barcelona's biggest problem according to a recent survey carried out by the city council. Now the problem could be losing tourists.

Barcelona mayor Ada Colau held an emergency meeting with representatives of the city's tourism sector on Tuesday. The three-star Rialto hotel in Barcelona's Gothic quarter located about 100 metres (yards) from the spot on Las Ramblas where the van used to mow down pedestrians came to a stop, received just five cancellations after the attack.

"There were very few cancellations and they were from people who were coming to spend just one night. Long-term bookings have remained," said the hotel's front desk manager, Vicente Rodriguez, 54. At the five-star W Barcelona hotel, whose sail-like structure dominates the city's seafront, also had a few cancellations but bookings have "stabilised in recent hours", said the hotel's director general, Stijn Oyen.

The Spanish Union of Travel Agencies said there were no significant cancellations for Barcelona and passengers were not changing their plans because of the attacks.

"What may happen is that people who planned to go to Barcelona may wait a bit before going," the body's vice-president, Jose Luis Mendez, said. The Barcelona Association of Tourist Apartments (Apartur) has not noticed demand cooling down.

"The pace of reservations has remained the same. We even continued to receive bookings on the night of the attack," its president Enrique Alcantara said. "My conclusion, even though it is sad, is that we are used to these type of events."

On Las Ramblas, among the flow of tourists and locals, Falko Wieclemann, a 49-year-old German professor looked on with his wife and daughter at the flowers, candles and messages left in honour of the victims. They arrived on Saturday, two days after the attack, for a week-long holiday. "We feel safe, it was an isolated act. We came from Berlin, the same thing happened there. Life has to go on," he said.

On the same day Jinwon Chun and her partner arrived from South Korea. "I heard about the attack the day before I left and I got scared. I thought about if I should travel or not, but I had planned it two months ago and here I am," the 38-year-old housewife said. Restaurants, however, have noticed a fall in revenues which they hope will be temporary.

"Everything is very quiet. People are scared and they don't want to sit on the terrace. On Friday we had reservations for 40 people and they all cancelled," he added. "I think Barcelona will bounce back. Maybe not to the same level as before, because we are having a record year but the impact won't be as dramatic as it has been these days," he added.