The attackers claimed that they attacked him as he had been using ‘abusive language’ for PPP leader Bilawal Bhutto Zardari. 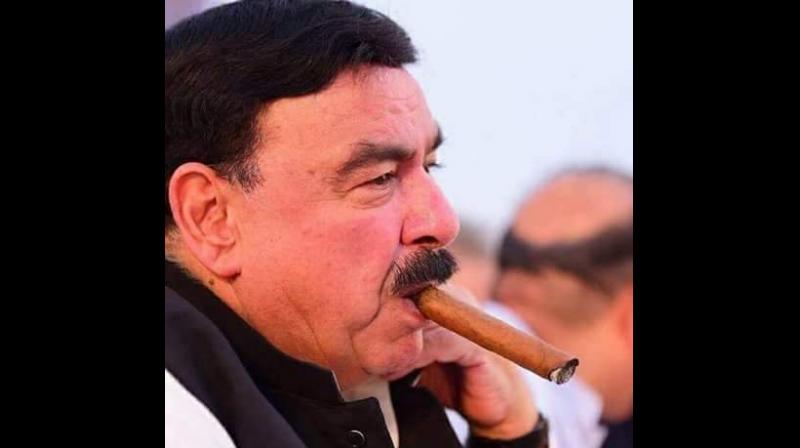 The attack took place when Rashid, who is also the chief of Awami Muslim League (AML), came out from a hotel after attending an awards ceremony in London to smoke a cigar. (Photo: Twitter | @ShkhRasheed)

London: Sheikh Rashid Ahmad, Pakistan’s Railways Minister, on Tuesday was allegedly assaulted by two members of the Pakistan People's Party in London who pelted him with eggs and punched him as well.

The attack took place when Rashid, who is also the chief of Awami Muslim League (AML), came out from a hotel after attending an awards ceremony in London to smoke a cigar.

The attackers allegedly fled from the scene right after the incident. However the next day, on Wednesday, two members of the PPP in UK - Asif Ali Khan and Samah Namaz - declared in a statement that they were responsible for the attack on Rashid.

The two claimed that they had attacked the Pakistan minister as he had been using "abusive language" for PPP leader Bilawal Bhutto Zardari.

Speaking on this, AML's UK president, Saleem Sheikh, told a Pakistani news portal that he would be seeking Rashid's permission to lodge a police case in the matter. "We saw Asif Khan and a woman being involved in the attack but they ran away from the scene and there was no video proof of their shameful act but now both have come out and claimed the attack. We will decide whether to report them to the police or not after speaking to Sheikh Rashid Ahmad,” he said, according to Times Now.

Sheikh also claimed that the attack was "pre-planned" as not many people knew that Rashid would use the side exit of the building to step out after the event.

Meanwhile, Asif Khan and Samah Naz alleged that Rashid had used "abusive language" against Bilawal. They said in a statement, "He has been using abusive and bad language during interviews against our Chairman Mr Bilawal Bhutto Zardari. He should be thankful we only used eggs as a British way of dealing with such uncivilized politician. He started this, we ended it."