The president denounced mass protests, which he said were receiving support from Western countries, and ordered army to defend the borders 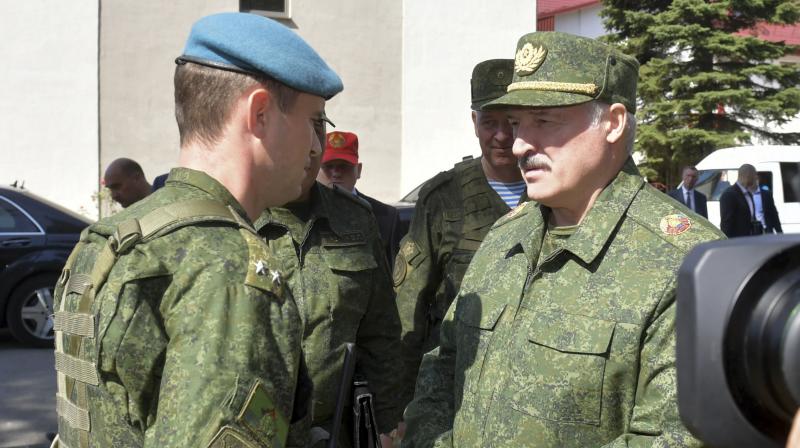 Belarusian President Alexander Lukashenko, right, speaks to an officer as he arrives to attend a meeting with military officials in Grodno, Belarus. (AP)

Minsk: Belarus was bracing Sunday for more mass protests against strongman Alexander Lukashenko, who has ordered the army to defend the country's territorial integrity after demonstrations broke out over his claim to election victory.

Opponents of Europe's longest serving leader have organised strikes and the largest protests in the ex-Soviet country's recent history rejecting his re-election and demanding that he stand down, with more than 100,000 people turning out across Belarus last weekend.

Pro-democracy protesters must "struggle for their rights" and not be distracted by the authoritarian leader's claims that the country was under military threat, opposition figurehead Svetlana Tikhanovskaya told AFP on Saturday.

"We are people of Belarus and we are a majority and we will not step away. We are not afraid of them any more," she said.

As Tikhanovskaya urged on protesters inside Belarus, Lukashenko -- who said he won a sixth presidential term with 80 percent of the vote two weeks ago -- turned to its borders.

On Saturday he inspected military units in Grodno, near Belarus's frontier with Poland, according to the president's press service.

The 65-year-old denounced the mass protests, which he said were receiving support from Western countries, and ordered the army to defend western Belarus, which he described as "a pearl".

"It involves taking the most stringent measures to protect the territorial integrity of our country," Lukashenko said.

His visit comes ahead of large-scale military exercises planned in the Grodno region between August 28 and 31.

The former collective farm director said NATO troops in Poland and Lithuania were "seriously stirring" near their borders with Belarus and ordered his troops into full combat readiness.

"The regime is trying to divert attention from Belarus's internal problems at any cost with totally baseless statements about imaginary external threats," Nauseda told AFP.

Lithuania's foreign ministry also announced Saturday that US Deputy Secretary of State Stephen Biegun will visit Lithuania and Russia next week for talks on the election fallout.

The European Union this week rejected Lukashenko's re-election and vowed to levy sanctions against what it said was a substantial number of people responsible for rigging the vote and cracking down on protests.

The Belarusian authorities have opened a criminal investigation into the opposition's Coordination Council, whose members are seeking new elections and a peaceful transition of power.

Lukashenko has rejected the idea of holding another ballot, dismissed calls to resign and accused the opposition of attempting to seize power.

On Friday he vowed to "solve the problem" of the protest movement.