Most of those hurt, one seriously, suffered leg injuries after getting entangled in the escalator's mangled mechanics, Italian media added. 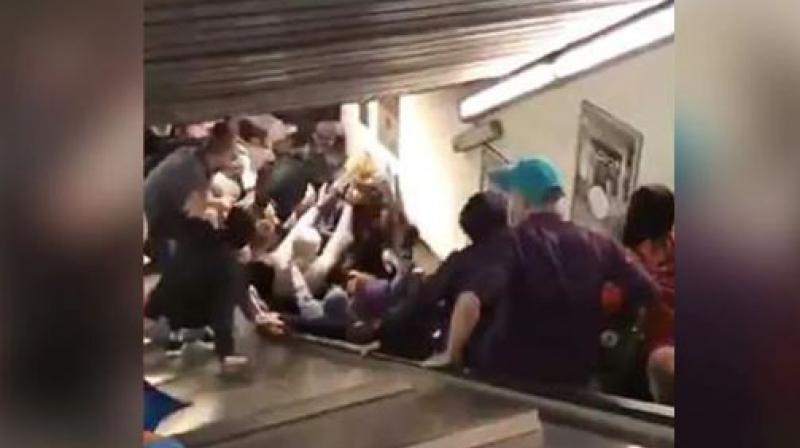 A video of the drama shows the descending escalator at Repubblica station suddenly and dramatically pick up speed with dozens of people on it, many screaming as they piled on top of one another at the foot of the moving stairway. (Photo: Screengrab | Twitter @Paulie G)

Most of those hurt, one seriously, suffered leg injuries after getting entangled in the escalator's mangled mechanics, Italian media added.

A video of the drama shows the descending escalator at Repubblica station suddenly and dramatically pick up speed with dozens of people on it, many screaming as they piled on top of one another at the foot of the moving stairway.

Media reports said witnesses spoke of football fans, seemingly drunk, jumping and dancing on the escalator just before its collapse, but supporters denied this ever happened.

"In any event, we are here to understand what happened and to offer our support to the wounded and their families," Rome mayor Virginia Raggi told journalists at the scene.

Some of the victims were seen wrapped in blankets and some wore neck braces as they were taken away from the scene on stretchers by emergency crews.

Several investigations have been opened, and the metro station near Rome's Termini train station was closed.

The horrific events took place around 1730 GMT, just over an hour before the kickoff of a Champions League match between Italy's Roma and Russian club CSKA Moscow.

The Russian fans were headed for the metro that would have linked them to the train to the stadium.

There was heightened security in Rome for some 1,500 Russian supporters, notoriously rowdy, expected to watch the game.

One Russian supporter, the subject of a stadium ban, had already been stopped at the airport as he tried to enter.

But according to Italian media, this did not prevent an assortment of incidents around the stadium hosting the match. One Russian fan was stabbed with a knife, and two others were hurt in clashes with other supporters.

Roma won the group stage match 3-0, tweeting after the match that: "The thoughts of everyone at #ASRoma are with the supporters injured prior to tonight's game. The club will do everything it can to provide the right support and assistance to those in need."

Red-Blue World, a CSKA fan group, set up a collection fund for those injured, as well as fans hurt in violence near the stadium.

In recent years, more than a dozen municipal buses have caught fire while in service, with several reports of metro passengers injured by malfunctioning hardware.

And a massive bridge collapse in Genoa in August -- which killed 43 people -- also raised safety questions about transport infrastructure in Italy.

Incidents on escalators have caused injuries, and even deaths, around the world.

In 2015, a woman was killed after she plunged through flooring over an escalator in a Chinese department store.

Security camera footage showed a panel in the floor giving way as the woman stepped off the escalator. As she fell half-way through she pushed her son forward, and a nearby shop assistant dragged him to safety.

And in March 2017, around 20 people were injured at a Hong Kong shopping centre when an escalator suddenly changed direction, sending people hurtling towards its base.