The five signatories still committed to the agreement have said they want Iran to stay in the deal. 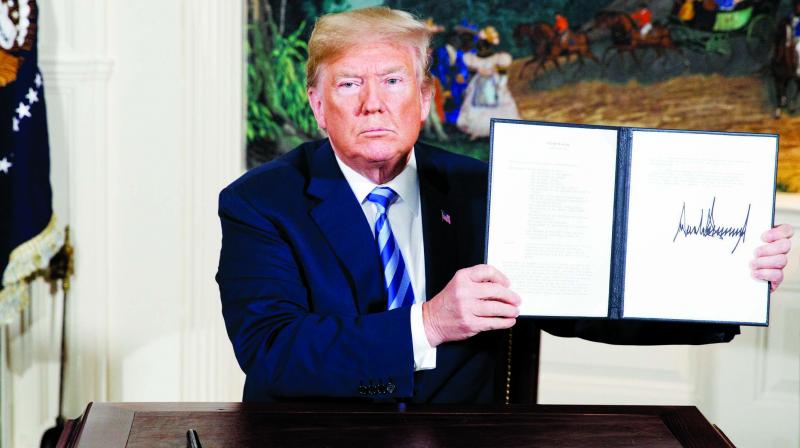 Since the US's pull out, the other signatories have since embarked on a diplomatic marathon to try to keep the agreement afloat. (Photo: File/AP)

Vienna, Austria: Signatories of the Iran nuclear deal meet with the Islamic republic in Vienna on Friday in a bid to save the agreement two weeks after Washington's dramatic withdrawal.

For the first time since the deal came into force in 2015, China, Russia, France, Britain and Germany will gather -- at Iran's request -- without the United States, which pulled out on May 8.

US President Donald Trump has long trashed the deal with Iran -- concluded under his predecessor Barack Obama -- saying it did not do enough to curtail Tehran's nuclear ambitions. He also said it did not go far enough in restricting Iran's ballistic missile programme, or its intervention in regional conflicts from Yemen to Iraq and Syria.

Since the US's pull out, the other signatories have since embarked on a diplomatic marathon to try to keep the agreement afloat.

Also Read: Iran warns US it would regret 'like never before' quitting nuclear deal

According to a report seen by AFP on Thursday, an International Atomic Energy Agency report shows Iran is still abiding by the deal's key restrictions on its nuclear facilities in return for relief from damaging economic sanctions.

The IAEA, however, is "encouraging (Iran) to go above and beyond the requirements" of the deal in order to boost confidence, said a senior diplomat in Vienna, where the IAEA is based.

Iran said it is waiting for concrete measures from the EU nations before it decides whether the deal can be saved while threatening to restart its uranium enrichment programme at an "industrial level" if not.

The five signatories still committed to the agreement have said they want Iran to stay in the deal, with the European countries saying they would not rule out further talks with the Islamic Republic on an expanded text.

However, several Iranian officials warned that the Vienna meeting would be devoted to the existing agreement only, implying that there was no question of broadening the discussions.