She will formally step down on June 7, after a three-day state visit to the UK by US President Donald Trump. 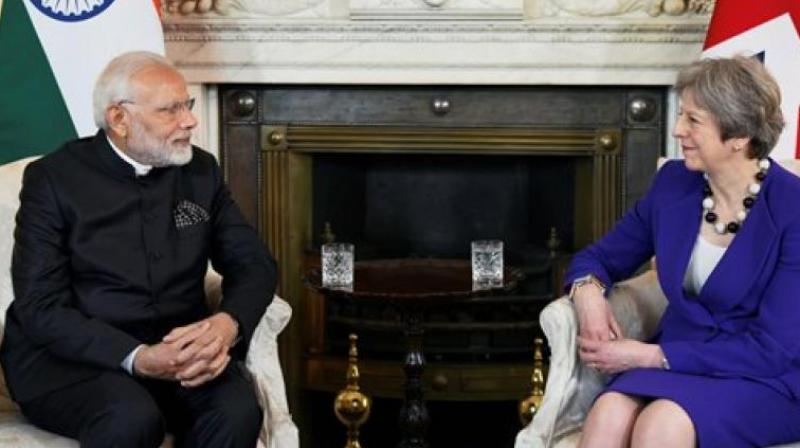 May announced her resignation as the Conservative Party leader and British Prime Minister on Friday as a leadership contest triggered in Brexit-hit Britain. (Photo: PTI)

London: Britain's outgoing Prime Minister Theresa May spoke to her Indian counterpart Narendra Modi on his election victory, discussing a range of issues including the G20 Summit in Japan next month and the ICC Cricket World Cup 2019 in England. In her conversation with Prime Minister Modi on Saturday, she praised India's democratic exercise and processes, a Downing Street spokesperson said.

May announced her resignation as the Conservative Party leader and British Prime Minister on Friday as a leadership contest triggered in Brexit-hit Britain. She will formally step down on June 7, after a three-day state visit to the UK by US President Donald Trump. "The Prime Minister (May) spoke to India's Prime Minister Narendra Modi to congratulate him on his success in the election. "The leaders agreed that the election was a significant exercise in democracy and that the authorities should be commended for delivering it so efficiently," the spokesperson said.

Prime Minister Modi on Thursday led his Bharatiya Janata Party to a landmark victory for a second five-year term in office, winning 303 seats in the 543-member Lok Sabha. "They also discussed the upcoming Cricket World Cup which the UK will host in June and July, and the passion for the sport that is shared between our two countries. "Both leaders looked forward to continuing the close cooperation between our countries, including at the G20 Summit in Osaka next month," the spokesperson said.

At least eight candidates, including hard Brexiteer and former foreign secretary Boris Johnson, are in the race to take over the reins from May as the UK's ruling Conservative Party leadership contest gets underway.