World   Europe  26 May 2019  Protestors gather in Tel Aviv to 'save democracy' from Netanyahu
World, Europe

Protestors gather in Tel Aviv to 'save democracy' from Netanyahu

Thousands of Israelis gathered here on night to protest against attempts to pass legislation that would grant protection to Netanyahu. 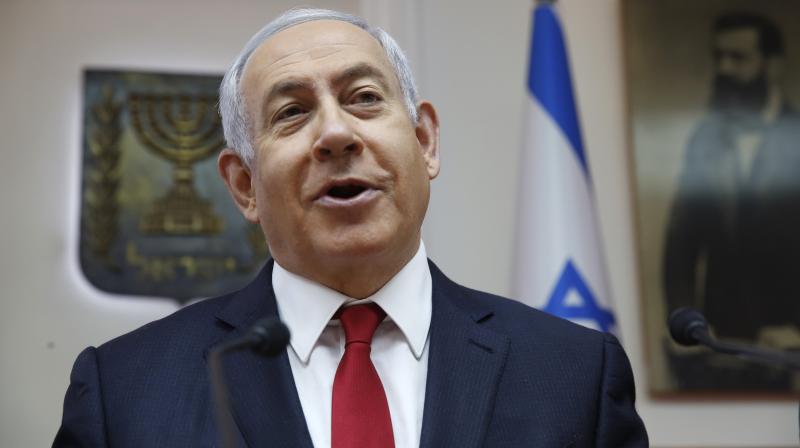 Netanyahu has until October to face a pre-trial hearing after Attorney General Avichai Mandelblit announced in February his intention to indict the leader. (Photo:AP)

Tel Aviv: Thousands of Israelis gathered here on Saturday night to protest against attempts to pass legislation that would grant protection to Prime Minister Benjamin Netanyahu from criminal prosecution and threaten the Israeli democratic checks and balances.

The protest was organised by the Center-left opposition parties, including the Blue and White and the Labor and Meretz, in cooperation with several civil society groups, under the banner "Stopping the Immunity Law -- A Defensive Shield for Democracy", The Times of Israel reported.

The protest comes amid reports that the Likud party and its leader Netanyahu are preparing to pass legislation granting the prime minister immunity in multiple corruption cases. The legislation is expected to weaken the judiciary as the later would be stripped off its power to overturn the laws protecting Netanyahu.

Netanyahu has until October to face a pre-trial hearing after Attorney General Avichai Mandelblit announced in February his intention to indict the leader on charges of fraud, breach of trust and bribery in three criminal cases.

"We will fight and we won't let up until we save democracy until we save Israel... the entire opposition will be united in this," said MK Ofer Shelah from Blue and White party.

Thousands of people on Saturday night waved Israeli flags and signs with slogans such as "One people, one law".

"We won't let you turn democratic Israel into the private court of a royal family or a sultanate," said Benny Gantz, head of the Blue and White alliance, which is set to be the largest opposition party.

Tamar Zandberg of the left-wing Meretz party said that "we're here to fight for our country".

"Netanyahu is going to crush the supreme court to prevent justice from taking its course with a fugitive criminal," Al Jazeera quoted him as saying, as protesters chanted "Bibi go home!"

The demonstration took place at the Tel Aviv Museum of Art on Saturday night.

Meanwhile, the prime minister denies any wrongdoing and says his legal difficulties are the result of a witch hunt by the opposition, the media, the police and the state prosecution, headed by a weak attorney general, aimed at ousting him.

Prior to the April 9 elections, Netanyahu gave mixed signals when asked whether he would seek to evade prosecution by means of Knesset legislation to guarantee himself immunity and to prevent the High Court from overturning that immunity.