The two countries also discussed the situation in the Gulf on the need to find a new pathway 'if the Iran nuclear deal is not acceptable'. 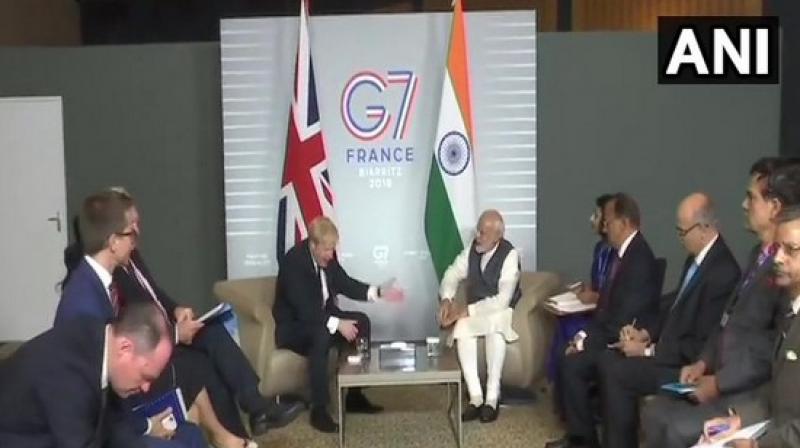 Biarritz: India and the United Kingdom have agreed to form a small team for progress in the economic agenda in the wake of Britain's decision to exit from European Union.

Briefing reporters about Modi's meeting with Johnson on Sunday, Foreign Secretary Vijay K. Gokhale said they had "very good talk". and "the principal discussion was focused on how in the post- Brexit scenario, we can develop the partnership and strengthen economic and commercial relations".

"The two sides agreed to form a small team that would set up the economic agenda. The principal discussion was focused on how in the post-Brexit scenario, we can develop the partnership, strengthen economic and commercial relations. What Prime Minister Johnson did say was that come October 31, Britain would leave European Union," he said.

"Therefore, the decision that we will set up this small team to see how we can progress that relationship thereafter," he added.

He said Johnson specifically talked about the need to develop partnership between the two countries and he understood that it is important for access to be given "for talented Indians to UK".

The British Prime Minister said he understood the value that talented Indians bring to the economy and society of Great Britain.

PM Modi congratulated Johnson and said he was prime minister of Great Britain at a critical time due to Brexit.

"The PM said he stands by PM Johnson, we stand with Great Britain and we are ready to work with them once Brexit is over," Gokhale said.

The two countries also discussed the situation in the Gulf on the need to find a new pathway "if the Iran nuclear deal is not acceptable.

The two leaders also agreed on the importance of gaining some clarity "what would happen" if and when the deal is signed and announced between the US and various Afghan groups.

The leaders also had some discussion on G7. They agreed on the importance of working together in Africa.

Johnson mentioned the issue of climate change and environment and Modi conveyed to him that India was launching a national campaign against plastic waste in the oceans and against single-use plastic.