'Prime Minister (Modi) really feels he has it (Kashmir) under control,' Trump at G7

President Trump had spoken about 'mediating' on Jammu and Kashmir and had described the issue as 'explosive'. 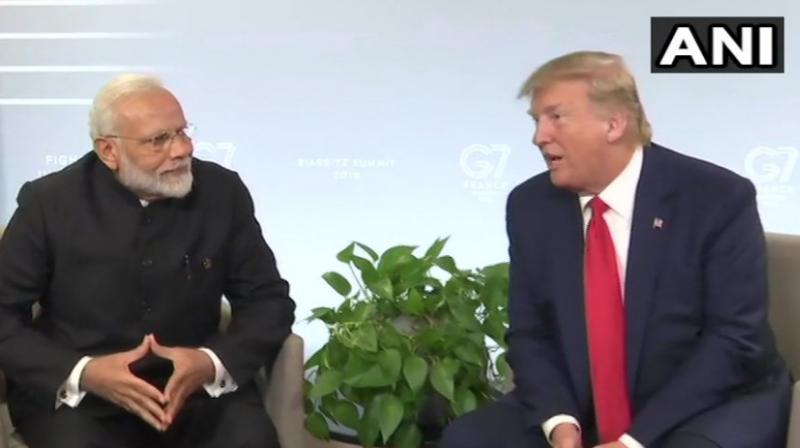 PM Modi with US President Donald Trump on the sidelines of G7 summit in France. (Photo: ANI)

France: Prime Minister Narendra Modi made it very clear to US President Donald Trump at the G7 summit in France that Kashmir was a bilateral issue between India and Pakistan, effectively rejecting an earlier offer by Trump to mediate.

Trump made a quick u-turn at his meeting with Modi and said: "We spoke last night about Kashmir, Prime Minister really feels he has it under control. They speak with Pakistan and I am sure that they will be able to do something that will be very good."

Earlier, Modi had said: "All issues between India and Pakistan are bilateral in nature, that is why we do not bother any country regarding them."

Both leaders shared an easy camaraderie and there was much laughter during the media meet after their meeting.

President Trump had earlier spoken about "mediating" on Jammu and Kashmir and has described the issue as "explosive".

Pakistan had urged the global community and the United Nations to intervene in the matter concerning Kashmir which has made headlines after India abrogated Article 370 withdrawing the state's special status.

President Trump had also asked Pakistan to "crackdown on groups on its territory that have attacked India in the past", senior US administration officials said.

Terming the Indo-US relations as "good", Trump said that both nations would endeavor to enhance trade relations.

"We are talking about trade, military and many different things. We had some great discussions. We were together last night for dinner and I learned a lot about India," Trump remarked.

Last week, President Trump for the second time offered to mediate on Kashmir, after phone calls with both PM Modi and Pakistani Prime Minister Imran Khan.

"Kashmir is a very complicated place. You have Hindus and you have the Muslims and I wouldn't say they get along so great," President Trump told reporters in the White House.

"I will do the best I can to mediate," he said. "...you have two counties that haven't gotten along well for a long time and frankly, it's a very explosive situation," he added.

Pakistan's attempts to create a stir in the United Nations Security Council over Kashmir fell flat after most of the participating nations agreed that scrapping of special status was a bilateral matter between New Delhi and Islamabad.

The meeting of the 15 nations -- five permanent members and 10 rotating members -- ended without any resolution.

On trade, which was also on the agenda, discussions were likely to focus on import duties. In May, the US ended India's designation as a beneficiary nation under a key preferential trade programme, which India said was "unfortunate".

The Generalised System of Preference (GSP) is the largest and oldest US trade preference programme and is designed to promote economic development by allowing duty-free entry for thousands of products from designated beneficiary countries.