PM Modi firmly asserted that all issues between India, Pakistan were bilateral and ‘that is why we don't bother any other country’ on it. 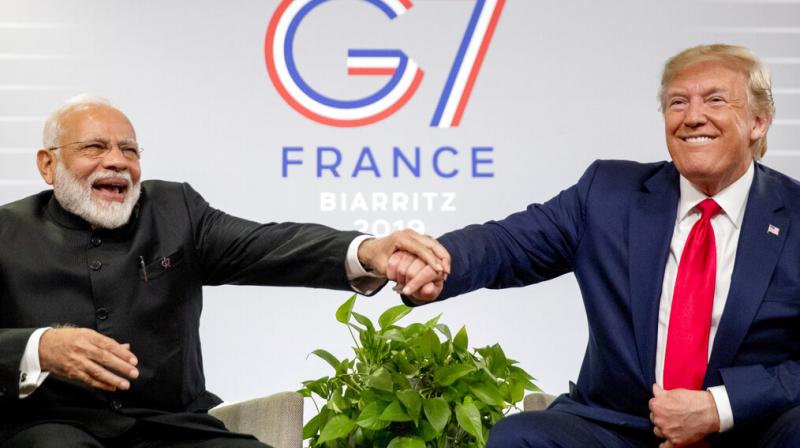 The two leaders held 40-minute discussions in Biarritz, the French town which is hosting the meeting of the world's most industrialised nations. (Photo: AP)

Biarritz: Prime Minister Narendra Modi and US President Donald Trump held talks today on the sidelines of the G7 Summit in France. The camaraderie between the two leaders was on display during a joint media interaction before they got down to their discussions.

Responding to a question about talks between the two leaders, PM Modi said in Hindi, "I think you should let us have the discussions first, and then we will let you know whatever is needed."

President Trump jokingly cut in saying, "He actually speaks very good English...he just doesn't want to talk."  The two leaders then chuckled and clasped each others' hands. Many in the room burst into laughter.

In the same sideline meeting between the two, PM Modi firmly asserted that all issues between India and Pakistan were bilateral and "that is why we don't bother any other country" on it.

The US President, who had repeatedly offered to mediate between the two countries, said: "We spoke last night about Kashmir, Prime Minister really feels he has it under control. They speak with Pakistan and I'm sure that they will be able to do something that will be very good."

He also added, "I am good friends with both Prime Ministers, I am here but I think the two can manage it themselves."

The two leaders held 40-minute discussions in Biarritz, the French town which is hosting the meeting of the world's most industrialised nations.