Was 'too soon' to meet Iran's leader who made surprise visit to G7: Trump 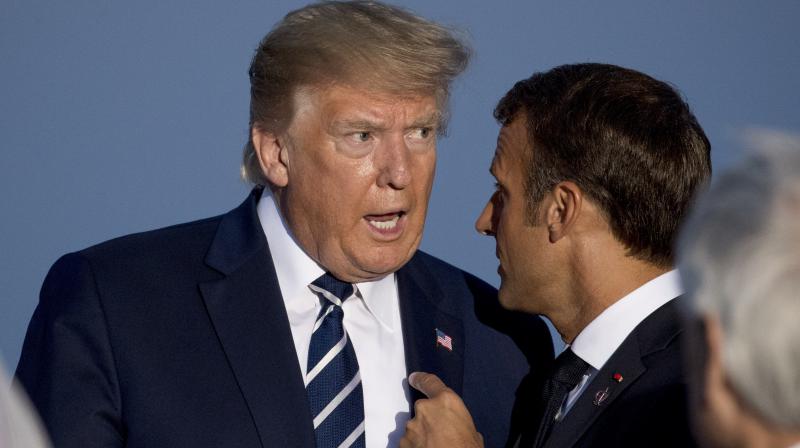 Macron has been trying for months to defuse the tensions between Tehran and Washington by finding ways of resuming dialogue, and held talks with Zarif in Paris on the eve of the summit. (Photo: AP)

France: US President Donald Trump said Monday that it was "too early" to meet Tehran's top diplomat, who made a surprise weekend visit to the G7 summit, but insisted that Washington was not looking for regime change in Iran.

"It's too soon to meet, I didn't want to," Trump told reporters at the summit, saying he knew that Foreign Minister Mohammad Javad Zarif was going to drop in for unscheduled talks.

"I knew he was coming," Trump said of the visit, which was engineered by France's Emmanuel Macron in a bid to break the diplomatic deadlock over Tehran's disputed nuclear programme.

Despite the smiles and bonhomie, a number of issues that divide the Group of Seven world leaders surfaced on Sunday - the first day of talks at the G7 Summit in Biarritz.

A landmark 2015 nuclear deal between Western powers and Iran all but collapsed after Trump unilaterally withdrew US support last year, reimposing sanctions that have crippled Iran's economy.

Macron has been trying for months to defuse the tensions between Tehran and Washington by finding ways of resuming dialogue, and held talks with Zarif in Paris on the eve of the summit.

Trump insisted that Washington was interested only in curbing Iran's nuclear ambitions.

"We're not looking for regime change. You see how that works (in other places)," he said. "What we want is very simple... non-nuclear."