Theresa May to seek MPs' approval for new Brexit strategy

Prime Minister Theresa May will on Wednesday face a vote by MPs over her newly revised Brexit strategy. 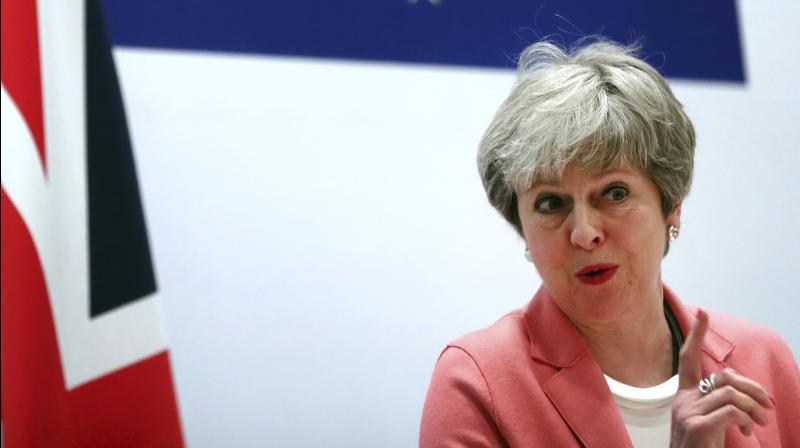 The embattled leader will ask lawmakers to approve a three-step plan set out on Tuesday. (Photo:AP)

Britain: Prime Minister Theresa May will on Wednesday face a vote by MPs over her newly revised Brexit strategy, which could allow them to approve an eventual delay to Britain's EU departure.

The embattled leader will ask lawmakers to approve a three-step plan set out on Tuesday that would give her more time to attempt to rework a draft divorce deal struck with the European Union.

Under the new plan, if she fails to come up with a Brexit deal that wins MPs' support by March 12, May will swiftly call further votes on what happens next -- including on Britain leaving the bloc without any deal and on postponing Brexit.

"Let me be clear, I do not want to see Article 50 extended," May told MPs Tuesday, referring to the EU law Britain invoked to schedule its exit from the European bloc.

"Our absolute focus should be on working to get a deal and leaving on 29 March.

"The House (of Commons) needs to come together... and send a clear message that there is a stable majority in favour of leaving the EU with a deal."

The prime minister, who reached an agreement with European leaders late last year but saw it overwhelmingly rejected by British lawmakers in January, had repeatedly ruled out delaying Brexit.

But she made the dramatic reversal this week amid threats of mass resignations from her own ministers, who fear Britain crashing out of the EU without a deal on March 29.

The government published an updated assessment Tuesday of preparedness for such a scenario, which found a majority of businesses are not ready for a new trading regime.

It also warned that some food prices were likely to increase -- particularly for fresh fruit and vegetables --- and that this could "exacerbate, or create, shortages".

However, May's change in course has already angered Brexit hardliners in her own Conservative Party, with influential MP Jacob Rees-Mogg warning "any delay to Brexit is a plot to stop Brexit".

The beleaguered British leader is also set to face a series of votes on various amendments tabled by MPs, including cross-party moves to lock in her commitments made on Tuesday.

Under May's proposals, she will have two more weeks to try to win concessions from the EU over the so-called "backstop" clause to keep the Irish border open in all scenarios.

Parliament will vote on any revised deal by March 12, and if lawmakers again refuse to back it, they would then vote the next day on whether Britain should leave without a deal.

Following that measure's expected defeat, they would then decide on March 14 on a "short, limited" extension of no more than three months before Britain leaves the EU.

"They are commitments I am making as prime minister and I will stick by them," May vowed on Tuesday.

But an amendment put forward by Labour MP Yvette Cooper and Tory backbencher Oliver Letwin, seeks to bind her government into the steps, and to bringing forward the "necessary legislation to change the exit date".

Meanwhile the main opposition Labour Party said it would be tabling an amendment with five demands, including Britain remaining in a customs union with the EU after Brexit.

In a significant shift, the party's leader Jeremy Corbyn announced Monday that it would support a second referendum on the issue if it could not get the demands adopted.

Cross-party supporters of another public vote on Brexit have also put forward an amendment to kick-start that process next month.

It was tabled by a small group of pro-European former Labour and Conservative MPs, who have broken away to form The Independent Group, with support from others including the Scottish National Party and Liberal Democrats.

It is not expected to pass in the House of Commons, where a majority of MPs are still thought to be against another referendum.

House of Commons Speaker John Bercow will on Wednesday morning select which amendments will be voted on by MPs, from around 7pm (1900 GMT).