Russia is one of the five permanent members of the Security Council, giving it veto power over resolutions 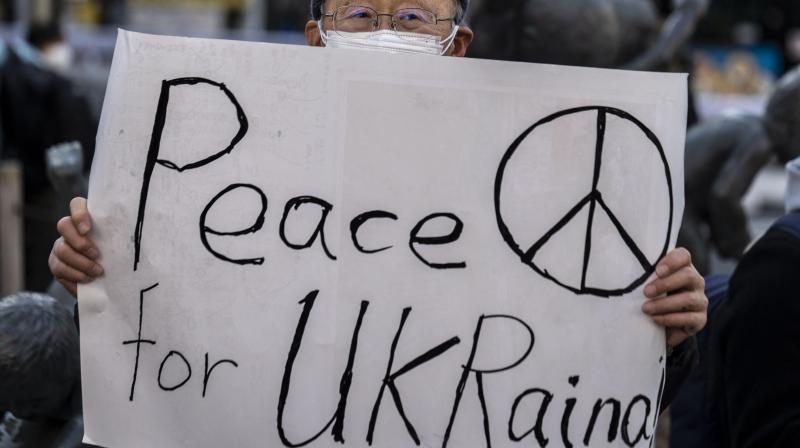 A man holds a placard as people gather at Tokyo's Shibuya area to protest Russia's invasion of Ukraine. (Photo: AFP)

Kyiv: Ukraine's president says Russia should be thrown out of the United Nations Security Council following its invasion of his country.

Ukrainian President Volodymyr Zelenskyy said in a video message Sunday that the Russian invasion of Ukraine amounts to an act of genocide, saying that Russia has taken the path of evil and the world should come to depriving it of its U.N. Security Council seat. Russia is one of the five permanent members of the Security Council, giving it veto power over resolutions.

Zelenskyy said that Russian attacks on Ukrainian cities should be investigated by an international war crimes tribunal and denounced the Russian invasion as state terrorism. He dismissed as lies Russia's claims that it wasn't targeting civilian areas.

Ukraine's president says his country is ready for peace talks with Russia but not in Belarus, which was a staging ground for Moscow's 3-day-old invasion. Speaking in a video message Sunday, President Volodymyr Zelensky named Warsaw, Bratislava, Istanbul, Budapest or Baku as alternative venues. He said other locations are also possible but made clear that Ukraine doesn't accept Russia's selection of Belarus.

Russia invaded Ukraine on Thursday, with troops moving from Moscow's ally Belarus in the north, and also from the east and south. Earlier, the Kremlin said a Russian delegation has arrived in the Belarusian city of Homel for talks with Ukrainian officials.

Kremlin spokesman Dmitry Peskov said the delegation includes military officials and diplomats. 'The Russian delegation is ready for talks, and we are now waiting for the Ukrainians,' Peskov said. There was no immediate comment from Ukrainian officials, who previously expressed their own readiness for peace talks with Russia but haven't mentioned any specific details on their location and timing.

Ukrainian President Volodymyr Zelensky said Sunday that Moscow was bombarding residential areas in Ukraine as its invading forces sought to push deeper into the pro-Western country.

"The past night in Ukraine was brutal, again shooting, again bombardments of residential areas, civilian infrastructure," Zelensky said in an address posted online. "Today, there is not a single thing in the country that the occupiers do not consider an acceptable target. They fight against everyone. They fight against all living things -- against kindergartens, against residential buildings and even against ambulances."

He said Russian forces were "firing rockets and missiles at entire city districts in which there isn't and never has been any military infrastructure". "Vasylkiv, Kyiv, Chernigiv, Sumy, Kharkiv and many other towns in Ukraine are living in conditions that were last experienced on our lands during World War II."

Finland will close its airspace to Russian planes, joining other European countries in ramping up sanctions against Moscow over its invasion of Ukraine, the government announced early Sunday.

Finland, which shares a 1,300-kilometre (800-mile) border with Russia, "is preparing to close its airspace to Russian air traffic," Transport Minister Timo Harakka wrote in an overnight tweet. He did not state when the measure would take effect.

Finland's flag carrier, Finnair, specialises in flights between Europe and Asia that fly over Russia, but its services are currently limited because of Asian entry restrictions as a result of the coronavirus pandemic.

Finland is also scheduled to approve the dispatch of a consignment of bullet-proof vests, helmets and a mobile hospital to Ukraine. Helsinki has also approved the shipment of around 40 artillery guns to Ukraine.

Street fighting broke out early Sunday in Kharkiv as Russian troops pushed into Ukraine's second-largest city, according to a regional official, following a wave of attacks elsewhere targeting airfields and fuel facilities that appeared to mark a new phase of an invasion that has been slowed by fierce resistance.

Russian troops approached Kharkiv, about 20 kilometers (12.4 miles) south of the border with Russia, shortly after Moscow launched its invasion of Ukraine on Thursday. But until Sunday, they remained on the outskirts of the city of 1.4 million without trying to enter while other forces rolled past, pressing their offensive deeper into Ukraine.

Early Sunday, Russian troops moved in and were engaged by Ukrainian forces, said Oleh Sinehubov, the head of the Kharkiv regional administration, who told civilians not to leave their homes. He gave no further details. Videos posted on Ukrainian media and social networks showed Russian vehicles moving across Kharkiv and a light vehicle burning on the street.

Elsewhere, huge explosions lit up the sky early Sunday south of the capital, Kyiv, where people hunkered down in homes, underground garages and subway stations in anticipation of a full-scale assault by Russian forces.

Russia invaded Ukraine on Thursday, and its troops are closing in on the capital, Kyiv, and making significant gains along the country's coast.