Protests in Spain as 5 men cleared of teenager's gangrape

In Madrid, men and women packed central streets chanting 'Shame! Shame!' and 'No' means 'No'. 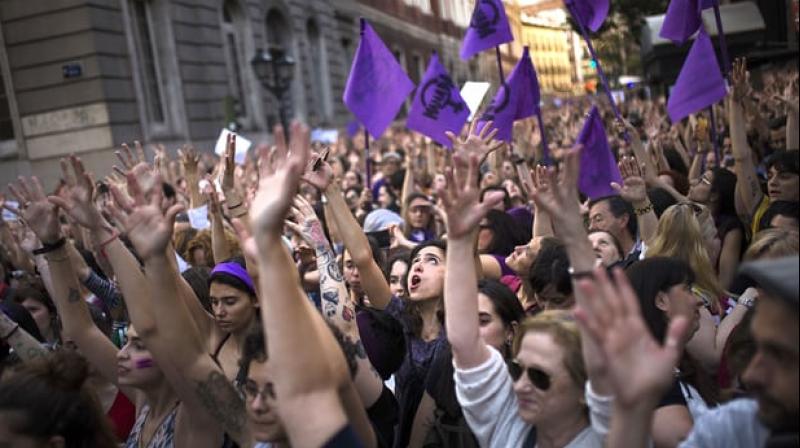 In Barcelona, thousands packed into the central square banging pots and pans and jangling their keys in the air. (Photo: AP)

Madrid: Thousands of protesters took to the streets across Spain on Thursday after a court cleared five men of the gangrape of a teenager at the 2016 San Fermin bull-running festival in Pamplona.

The court in the northern region of Navarra on Thursday convicted the men, who had recorded video of the attack on their mobile phones and laughed about the incident afterwards on a Whatsapp group, with the lesser crime of sexual abuse.

The decision drew immediate criticism and outrage. Thousands gathered in cities across Spain from Seville to Barcelona and outside the Justice Ministry in Madrid bearing notices reading "I believe you sister" and chanting "It's not abuse, it's rape".

In Madrid, men and women packed central streets chanting "Shame! Shame!" and "'No' means 'No'". In Barcelona, thousands packed into the central square banging pots and pans and jangling their keys in the air.

The so-called "Wolf Pack" case had already sparked widespread anger around Spain following concern over increased reports of sex attacks at the annual festival and over the mistreatment of women in general.

It has also drawn international attention, coming at a time of heightened global concern over the sexual abuse of women in the wake of the Harvey Weinstein scandal.

After a five-month trial held behind closed doors to protect the victim's identity, a judge read out the sentences in the court in the northern region of Navarra.

The state prosecutor had asked for prison sentences of more than 20 years for each of the men. Instead they were given nine-year sentences.

Under Spanish law, the lesser charge of sexual abuse differs from rape in that it does not involve violence or intimidation.

The charge is used in cases of sexual activity between underage partners or those seen not capable of giving permission for sexual contact, such as those who are severely handicapped or under the influence of drugs or drink.

Politicians across the political spectrum condemned the ruling.

"As a citizen and as a father, I find it hard to understand this sentence," tweeted Albert Rivera, head of market-friendly political party Ciudadanos.

"It seems to be saying to victims that if you don't take on five thugs double your size, putting your life at risk, it's not rape," said Pablo Iglesias, leader of left-wing Podemos.

The five men, including a former policeman and a former soldier, and the victim, who was 18 at the time of the incident, were not present in court. The men, dubbed by Spanish media "The Wolf Pack" after the name of their Whatsapp group, have been held in custody since July 2016.

The judge, who did not give the reasoning behind the sentence, also ordered the men to pay the victim 50,000 euros (USD 60,825) in compensation. The ruling can be appealed in Spain's Supreme Court.

The incident took place in the lobby of a building in the early hours of the morning at the San Fermin festival, which brings more than one million people to Pamplona for the nine-day-long festival in July.

One of the men stole the woman's mobile phone following the attack, leaving her with no means of contacting the friend with whom she had come to the festival.

She was found crying on a bench by a couple who rang the police when she said she had been sexually assaulted. She made a statement to the police, describing the five men who were later arrested.

Fragments of video from the men's mobile phones taken at the scene were used as evidence in the trial, alongside witness accounts and biological tests. The defence team argued the incident was a case of consensual group sex.

The Running of the Bulls involves hundreds of people dressed in white shirts and red neckerchiefs running down narrow streets in front of fighting bulls before ending in the city's bull-ring, where bullfights take place in the afternoon.

The festival is just as famous for the drinking and revelry on the sidelines, with huge street parties, processions and firework displays. The event draws thousands of tourists from all over the world.

Thousands of people took to the streets two years ago to protest against sexual assault at the festival and the Pamplona council has mounted a campaign against sexual harassment in recent years, increasing policing and encouraging women to report attacks.