Largely muted in the crisis until now, Germany's opposition parties are also beginning to grow more critical of the government's course 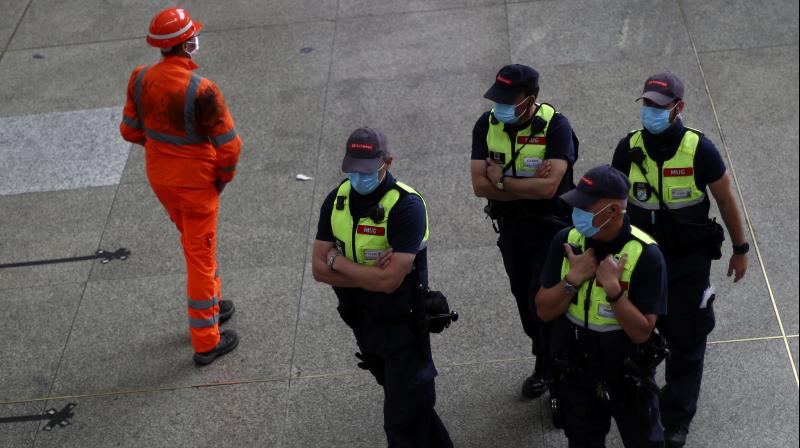 Security stuff wearing face masks to protect against the spread of the coronavirus at the central station in Munich, Germany. (AP)

Berlin: German Chancellor Angela Merkel has been praised at home and abroad for her reaction to the coronavirus crisis, but as voices of discontent grow louder, support for the government's strategy could be on the wane.

Though Germany began to lift lockdown measures last week, Merkel has urged caution and slammed growing impatience to shake off the curbs on public life introduced a month ago to slow contagion.

The restrictions -- but also greater testing capacities -- have seen Germany keep its mortality rate far lower than that of its European neighbours.

According to official figures, just 3.7 per cent of the country's more than 150,000 confirmed coronavirus cases have led to death.

The restrictions have also met with public approval. Almost three-quarters of the population said they supported them in a Kantar poll published Friday.

In full-blown crisis just a few months ago, Merkel's CDU/CSU conservative alliance has meanwhile rebounded in the polls, jumping ten points in the last two months to 38 percent.

Yet the mood could be about to change.

Wolfgang Schaeuble, an elder statesman of German politics and current president of the Bundestag lower house, warned that extended restrictions would impinge on fundamental citizens' rights.

"When I hear that protecting lives should come above everything else, I don't think that is absolutely true," he told Berlin daily Der Tagesspiegel on Sunday.

Merkel also provoked the ire of regional leaders when she suggested last week that they had been too eager to relax restrictions.

Armin Laschet, state premier for Germany's most populous region North-Rhine Westphalia and a candidate to succeed Merkel as CDU leader, protested that the discussion over how to lift lockdown measures was "appropriate".

"It is of course still a question of life and death," he told public broadcaster ARD on Sunday night.

Yet he insisted that the negative effects of lockdown must also be "weighed up", pointing in particular to children "who have had to stay at home for the last six weeks".

He also attacked what he saw as the pessimistic predictions of some medical experts, pointing out that "40 percent of intensive care beds are empty" in his state.

Germany's most popular newspaper Bild echoed Laschet's words in a scathing editorial on Monday, accusing Merkel of being "stubborn, pig-headed and bossy".

Largely muted in the crisis until now, Germany's opposition parties are also beginning to grow more critical of the government's course.

The Greens, still the highest polling opposition party despite a recent slump, have urged more caution. On Sunday, co-leader Annalena Baerbock slammed plans to allow Bundesliga football to resume without spectators from next month.

The leader of the liberal FDP Christian Lindner warned that consensus over coronavirus measures was breaking down, declaring the "end of national unity".

"If the state is restricting freedoms, it must justify it," he told RBB broadcaster on Monday.

The FDP's concern over the erosion of civil liberties and the fate of small and medium-sized businesses is also shared by more extreme groups.

Far left and far right protesters have assembled in Berlin every Saturday in recent weeks, calling for "democratic resistance" against what they claim are authoritarian and unconstitutional coronavirus restrictions.

Police arrested around 100 of an estimated 1,000 protesters last Saturday and a further demonstration is planned for May 1.

"The absolute shutdown was avoidable and (the government) is now missing a chance to end it," claimed AfD lawmaker Sebastian Muenzenmaier, adding that "all shops must be opened: give the people back their liberty!".

Weekly newspaper Die Zeit warned the AfD could "profit from the long term consequences" of the virus such as mass unemployment.