The vote provided Britain's first measure of support for European institutions since a 2016 referendum pushed the country out of the bloc. 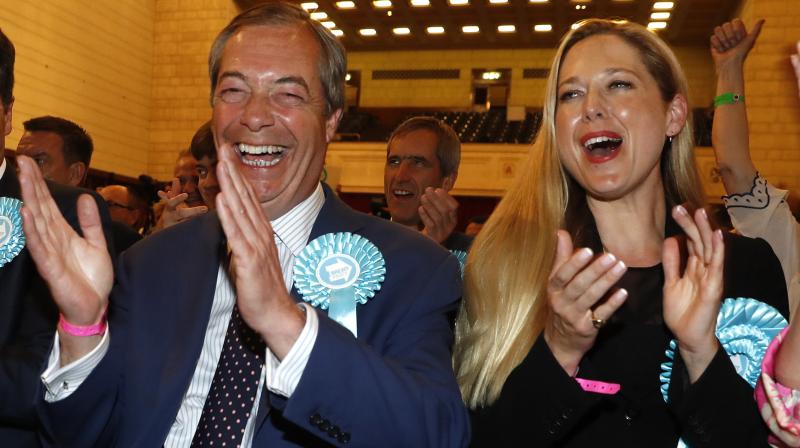 Britain was supposed to have left the EU on March 29 but the entire process has been held up by a parliamentary deadlock. (Photo:AP)

The European poll was held against the backdrop of political disarray in the UK that saw Prime Minister Theresa May announce her resignation after failing to deliver Brexit on time.

"It looks like it's going to be a big win for the Brexit Party," Farage told reporters as he arrived in Southampton for a vote count for the South East region where he is standing as a candidate.

The vote provided Britain's first measure of support for European institutions since a 2016 referendum pushed the country out of the bloc by a 52-48 percent margin that is being argued over today.

Britain was supposed to have left the EU on March 29 but the entire process has been held up by a parliamentary deadlock.

Farage's newly-formed group has capitalised on anger among Brexit voters, with preliminary results showing it far in the lead with 31.5 percent of the vote.

May's bickering Conservative Party -- now in the throes of a leadership contest involving much of her current cabinet -- did as poorly as many of its leaders had feared.

The early results showed them on around 7.5 percent and trailing in fifth place behind the Greens in fourth.

Vince Cable's pro-EU Liberal Democrats surged to 20 percent from 6.7 percent in 2014 and were ahead of the 16.5 percent of the main opposition party Labour Party of socialist Jeremy Corbyn.

The European election offered an outlet for Britons to vent their frustration with their two big parties.

The Conservatives knew they were facing a drubbing and barely bothered to campaign.

But Labour was also punished for refusing to clearly spell out whether it still wanted Britain to be in our out of the EU.

Corbyn has rebuffed his own party's attempts to lobby for a second Brexit referendum that could undo the first one's unexpected outcome.

Neither party had a clear European Election campaign platform -- unlike the Brexit Party's call for a split from the EU at any cost and the Liberal Democrats' open desire to stop the process in its tracks.

Farage wants Britain to swiftly and cleanly break off from the EU after more than 40 years by adopting World Trade Organization (WTO) free-trade terms.

"To honour the democratic vote of the people and the promises that were made, the only thing we can do is leave on WTO terms," Farage said earlier this month.

"Once we have left then we can negotiate a free-trade deal."

Cable argues that such a step would wreck untold damage on the UK economy.

"A vote for the Liberal Democrats is a vote for an international, outward-looking Britain," Cable told his final election rally last week.

"A vote for the Liberal Democrats is a vote to stop Brexit."

The Conservatives must now decide what they intend to do about the long-suffering EU withdrawal deal May reached with Brussels last year.

Parliament rejected the pact three times and was on course to do so again before May quit.

The EU refuses to re-open its text and Conservative leadership favourites like Boris Johnson want Britain to leave with or without a deal when the twice-delay departure date arrives on October 31.

Analysts think that Sunday's early results could push the Conservatives to embrace the tougher Brexit line.