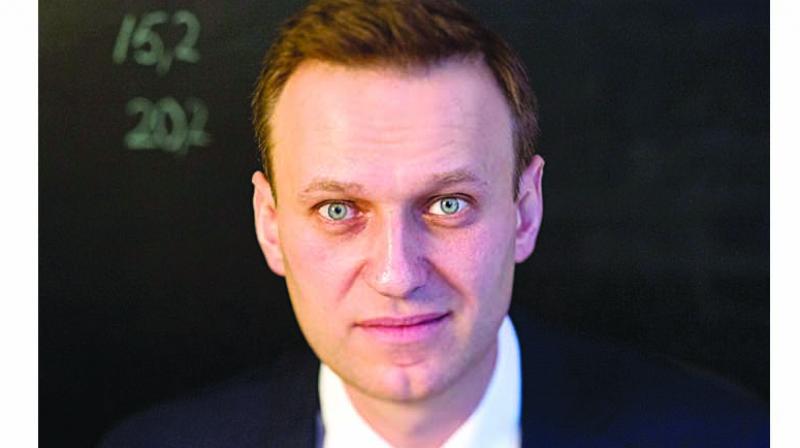 Moscow: Russian police announced on Thursday they had begun a preliminary examination of opposition leader Alexei Navalny's illness after the Kremlin dismissed German doctors' findings that he was apparently poisoned.

Transport police in Siberia said they have started "a pre-investigation check" into what led to Navalny's hospitalisation in the city of Omsk to establish "all the circumstances" and decide whether to open a criminal probe.

The 44-year-old politician and anti-corruption campaigner fell ill on a plane to Moscow from the Siberian city of Tomsk on Thursday.

The plane made an emergency landing and he spent two days in a clinic at Omsk in a coma before being transferred to Berlin's Charite hospital.

Kremlin spokesman Dmitry Peskov on Wednesday rejected international calls for a transparent investigation into the incident.

He said the decision was down to law enforcement authorities but that it was not possible to say Navalny was poisoned since no toxic substance had been identified.

German medics said Monday they do not know the exact substance involved while Navalny was apparently poisoned with a substance that inhibits the cholinesterase enzyme, a feature of nerve agents.

Russian doctors said their tests did not find any trace of poison while they treated Navalny with the same antidote that German medics are using.

Navalny's allies blame President Vladimir Putin and say Navalny may have been poisoned by a cup of tea he drank at Tomsk airport.

The preliminary check by police announced a week after the incident is a low-key response after Navalny's allies asked for an investigation into an attempted assassination of a public figure.

Police do such checks to determine whether a crime has been committed.

It comes after police and plain clothed security service agents questioned doctors at the hospital without making any public statements.

Transport police said they searched locations that Navalny visited and his hotel room, apparently referring to where he stayed in Tomsk.

They said they also examined security camera footage and confiscated "more than 100 items that could have value as evidence".

Police said that they did not find any "strong-acting or narcotic substances."