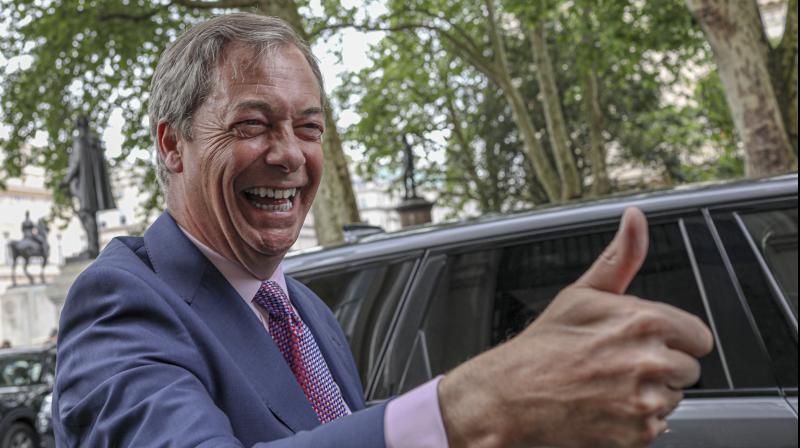 Farage only registered his party in February but succeeded in leveraging his reputation as one of the architects of the 2016 referendum. (Photo:AP)

London: Anti-EU populist Nigel Farage admitted Monday that his Brexit Party lacked policies beyond pulling Britain out of Europe and would now consult supporters for a way to seize the UK parliament.

The ruling Conservatives finished fifth with nine percent -- their worst performance since 1832 -- and the main opposition Labour Party was also punished for not clearly spelling out its Brexit stance.

Farage only registered his party in February but succeeded in leveraging his reputation as one of the architects of the 2016 referendum that triggered Britain's attempt to split from the EU.

He attributed his success Sunday to outgoing Prime Minister Theresa May's failure to turn Brexit into a reality by its original March 29 deadline.

"When people woke up on March 31 and realised that we haven't left the European Union, that's when in large numbers they became ready to vote for another party," he said.

EU leaders have agreed to delay the departure date until October 31 to avoid a no-deal breakup that threatens to wreck economic havoc on both sides of the Channel.

"If we don't leave on October 31, then the Brexit Party will go on to a general election and stun everybody there too," Farage said.

But he conceded that he does "not yet" have a policy beyond Brexit.

"We've got an awful lot to do -- a lot to do in terms of policy," he told a group of reporters.

"We are going to form policy in direct communication with them."

The two main parties will want to avoid a snap general election after the drubbing they received in the European vote.

Some political analysts believe the more likely outcome is of Britain heading to a second referendum that could either help settle the impasse or at least push back a chaotic breakup.

Farage's vision of a grassroots approach to politics reflects the populist style of parties such as Italy's Five Star Movement (M5S) of Luigi di Maio.

"Unlike any other party, not all of us here agree on every single thing," he said of his new crop of European Parliament members.

"But it's pretty clear already that the main agenda is going to be wholesale political reform in this country," Farage said.

"Very clearly, we are going to be a party that's not going to be on the side of the multinationals."

Farage's immediate aim is to test his party's strength by contesting a June 6 by-election in the eastern England city of Peterborough.

"We will give it our best shot," he said.