Moscow will ultimately respond to insolence of US sanctions: Putin

The US legislation is aimed at punishing the Kremlin for allegedly meddling in the 2016 US presidential election. 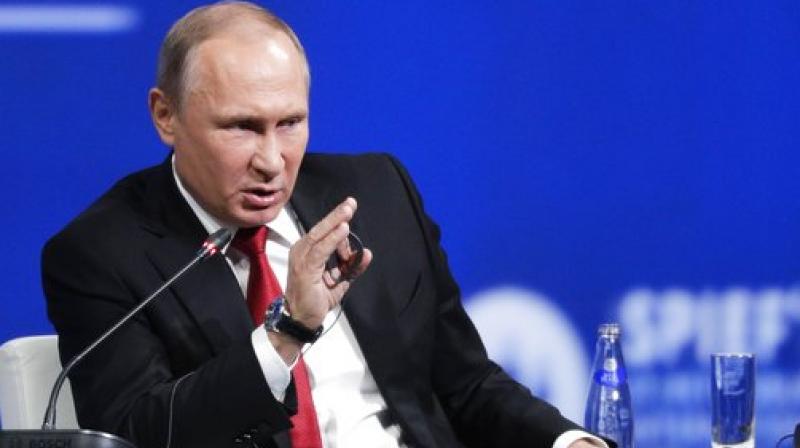 Savonlinna: Russian President Vladimir Putin said Thursday that Moscow will ultimately have to respond to sanctions imposed by the United States that he condemned as insolent towards Russia.

"We are behaving in a very restrained and patient way, but at some moment we will need to respond," Putin said at a news conference after talks with his Finnish counterpart Sauli Niinisto.

He complained that "it's impossible to endlessly tolerate this kind of insolence towards our country," referring to tougher US sanctions that were backed by the House of Representatives on Tuesday.

"This practice is unacceptable -- it destroys internatioanl relations and international law," Putin said of sanctions.

Nevertheless he did not give any detail on what Russia's response could be, saying simply: "we will see," adding that he had not seen the final version of the US sanctions bill.

The US legislation is aimed at punishing the Kremlin for allegedly meddling in the 2016 US presidential election, and Russia's annexation of Crimea.

It is expected to be passed by the Senate, after which US President Donald Trump will face the tricky choice of whether to veto the legislation.

The Russian strongman criticised the probe into Russian meddling in the US presidential election, saying that he "does not see this as an investigation."

Instead he said, the probe bears witness to a "rise in anti-Russian hysteria" in Washington.

At the same time he said he regretted Russia's worsening relations with the United States.

"In answer to your question on whether I regret the worsening of relations with the US, I can give a direct answer: of course, we do regret it very much," he told a journalist.

"It's a great pity that Russian-US relations are being sacrificed to resolve questions of domestic politics," Putin said, specifying that "in this case, it is the battle between President Trump and his political opponents."

The two countries acting in agreement "could solve very acute problems much more effectively that concern the people both of Russia and the US," Putin said, specifying the "settlement of acute international crises (and) the fight with terrorism."

He said he hoped "today's state of affairs will end at some point and we will move on to a new quality of relations, we will strengthen them and build them up in the interests of the peoples of the US and Russia."