The protest was the latest in a wave of demonstrations calling for fair local elections in the capital. 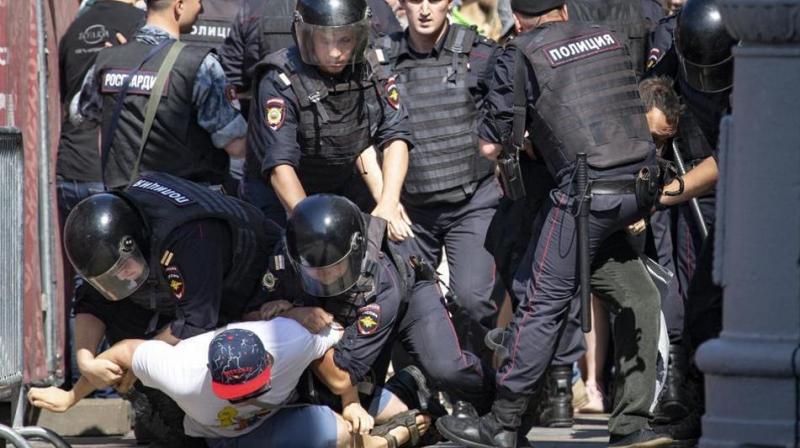 The rally came a week after the capital’s biggest protest in years, when some 22,000 marchers called on officials to reverse rulings and allow opposition activists to stand for the city council in September. (Photo: AP)

Moscow: Police in Moscow said they arrested more than 1,000 people Saturday at a banned opposition protest calling for city authorities to reverse decisions to exclude key opposition candidates from the ballot paper.

The protest was the latest in a wave of demonstrations calling for fair local elections in the capital.

Around 3,500 people took to the streets for the unauthorised rally, according to official figures. Several of the arrests were violent and police used batons against protesters, AFP reporters at the scene saw.

In all, “1,074 people have been arrested for a variety of offences during an unauthorised demonstration in the centre of the capital”, Moscow police were quoted as saying by Russian news agencies.

The rally came a week after the capital’s biggest protest in years, when some 22,000 marchers called on officials to reverse rulings and allow opposition activists to stand for the city council in September.

Since then investigators have raided the homes and headquarters of several disqualified candidates, while top Kremlin critic Alexei Navalny was jailed for 30 days for calling the fresh protest.

He said the last time he had seen this level of pressure on activists was in 2012, when President Vladimir Putin’s return to the Kremlin after four years as prime minister sparked popular dissent.

Other leading opposition figures and would-be candidates were arrested in the hours leading up to the Saturday’s protest, which comes amid declining living standards and a fall in Putin’s approval ratings.

Local polls are a rare opportunity for dissenting voices to participate in political life as anti-Kremlin parties have been squeezed out of parliament over Putin’s two decades in charge.

Groups of protesters had tried to blockade several streets in central Moscow in the early evening, but large numbers of police were quickly deployed to the area and broke it up, AFP journalists said.

“This is our city!”, “Shame!” and “We want free elections,” the crowd chanted earlier.

Politician and disqualified candidate Dmitry Gudkov was arrested shortly before the march and released in the evening. Earlier he had said the future of the country was at stake.

“If we lose now, elections will cease to exist as a political instrument,” he said.

While pro-Kremlin candidates enjoy the support of the state, independent candidates say they have been made to jump through countless hoops in order to get on the ballot for the city polls.

After activists and ordinary Muscovites staged pickets last week, including outside the local election commission building, investigators said they were launching a criminal probe into obstructing the work of election officials.

If found guilty, organisers risk up to five years in prison.

Rights group Amnesty International denounced what it said was the police use of “excessive force” and called for the immediate release of peaceful protesters.

Navalny ally Ivan Zhdanov said he had been arrested shortly ahead of the demonstration. Barred candidate Ilya Yashin was released after being detained in the early hours of Saturday morning following a raid on his home.

“The authorities have lost all sense of reason. They are behaving in a way that is almost sadistic,” Yashin said on Twitter, announcing another Moscow protest for August 3.

Would-be candidate Lyubov Sobol, who this week launched a hunger strike, was arrested at the demonstration before also being later released and fined 30,000 rubles (USD 475).

Elena Rastovka, a 68-year-old pensioner at the demonstration, told AFP: “I’ve been afraid all my life, but enough is enough. If we stay at home, nothing will change.”

Some said it was the authorities’ heavy-handed response that had turned a local issue into a major protest movement.

“Who would have thought it would become important to take part in such a bizarre and boring affair as the Moscow parliament election?” asked Viktoria Popova, a 30-year-old illustrator, ahead of the rally.