Since the crackdown in Belarus, Lithuania and Poland have eased coronavirus restrictions to allow in people on 'humanitarian grounds' 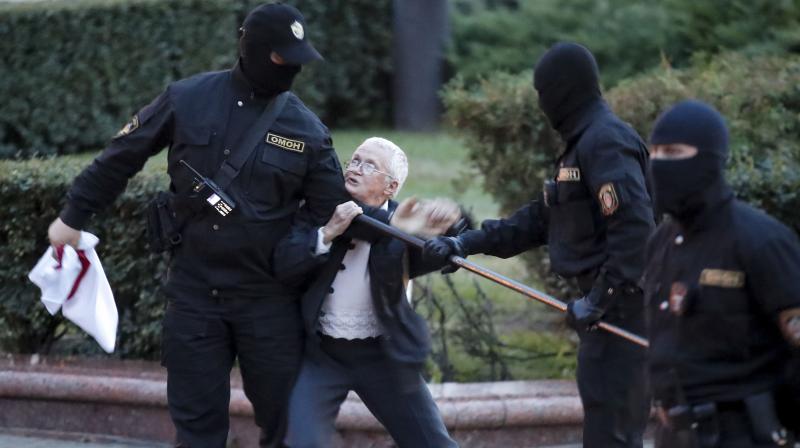 Vilnius: A few weeks ago, Belarusian sound engineers Vladyslav Sokolovsky and Kirill Galanov were arrested for playing an iconic Soviet-era protest song at a pro-government rally in Minsk.

Now, they are among around two dozen pro-opposition Belarusians who have sought refuge in neighbouring Lithuania -- along with opposition leader Svetlana Tikhanovskaya.

"I'm not even thinking about going back at the moment. It's not clear what is happening and it's dangerous," Sokolovsky, 30, told AFP.

Sokolovsky was jailed for 10 days for his act of defiance on August 6 -- just before a presidential election that has led to unprecedented mass protests against President Alexander Lukashenko's 26-year rule.

The musician remembers being held in solitary confinement, then in overcrowded cells, and deprived of a cot but he was spared the beatings handed out to other pro-democracy protesters.

After being released, Sokolovsky was taken in for questioning again for several hours on August 21 at the interior ministry and was threatened with additional criminal charges.

"The next day I made my way to Lithuania with the help of the embassy," he said, adding that Lithuania had originally offered assistance after he played the song "Peremen!" (Changes).

The act turned the song, performed by Russian 1980s rock star Viktor Tsoi and his band Kino shortly before the fall of the Soviet Union, into an anthem and a rallying cry for protesters.

A clip of the song has even been tweeted by Lithuanian Foreign Minister Lina Linkevicius with the words in English: "Belarus has awaken".

Waves of repression in Belarus have turned Lithuania, an EU and NATO member, into a place of refuge for pro-democracy Belarusians.

Since the crackdown in Belarus, Lithuania has eased coronavirus restrictions to allow in people from Belarus on "humanitarian grounds".

Poland has also announced an easing of entry restrictions to let in fleeing Belarusians, as well as offering to treat anyone injured in the recent violent crackdown on mass protests.

An interior ministry spokeswoman said Lithuania has accepted 22 Belarusian activists so far -- half of whom have requested political asylum.

"All of them are in safe environments," the spokeswoman said, adding that another 14 activists have received permission to arrive in Lithuania but have not yet crossed the border.

Lithuania's offer of shelter for protesters is part of a broader diplomatic effort to boost international support for protests in Belarus.

These moves have angered Russia, which supports Lukashenko and has condemned Vilnius for what it calls an "undisguised interference in the affairs of this neighbouring state".

Lithuania and Belarus have close historic ties, dating back to the 14th-century Grand Duchy of Lithuania, but have followed very different paths since the breakup of the Soviet Union.

The Baltic states are firmly anchored in the West, having joined the European Union and NATO in 2004, but Belarus has turned into one of the world's most isolated states under Lukashenko.

"I'm a musician, I play the guitar. But at the moment I'm not up to it. I am trying to resolve remotely all my problems at home."