The world continues to reel under the effects of coronavirus pandemic. 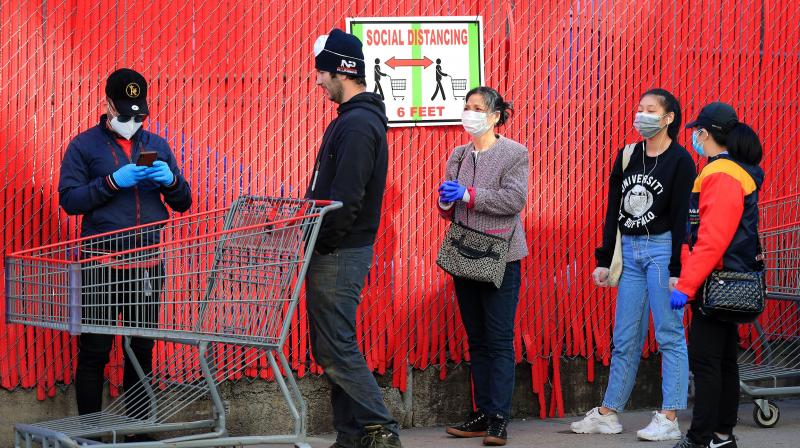 Excitement over a move towards normality in many places was tempered by fear of new outbreaks and growing evidence of the economic devastation wreaked by the pandemic.

The crisis has left tens of millions unemployed in the US, which has by far the highest number of confirmed COVID-19 fatalities -- around a third of the global death toll of 214,000, according to an AFP tally.

Forecasts warn of the worst global recession in a century, with demand for goods gutted, and travel and tourism hammered.

British Airways became the latest airline to sound the alarm, saying it may have to cut its workforce by a third.

In Lebanon, there were more immediate signs of economic crisis, with protesters confronting soldiers in defiance of a nationwide lockdown.

"I came down to raise my voice against hunger, poverty and rising prices," Khaled, 41, told AFP, saying he had lost his job and could no longer support his three children.

Shops, markets and selected schools will reopen from next month in France, with masks required on public transport and work-from-home orders in place for several more weeks.

From Wednesday, masks will be needed to enter shops across Germany. Face coverings were already compulsory on buses, trains and trams.

"We all need to take care that we don't end up with more infections," said Lothar Wieler, president of Berlin's Robert Koch Institute for disease control. Germany is being closely watched as data on infection rates showed mixed results.

'Cries of the people'

Italy, Spain and France have been the worst affected European countries, with each reporting more than 23,000 deaths.

Spain said restrictions would be slowly lifted over the next two months, while Italians will be able to exercise outdoors and visit relatives from next week -- but hugs and handshakes will not be allowed.

Other nations from Russia to Nigeria also plan to ease lockdown measures, despite warnings from experts of a second wave of contagion if restrictions are lifted too hastily.

"For almost one month I have not earned a penny," he said. "I hope life will soon return to normal."

More than three million people worldwide are known to have caught the respiratory disease that first emerged in China in December, but the actual figure is thought to be much higher as many countries only test the most serious cases.

US President Donald Trump has increasingly sought to blame China for the pandemic, but Beijing has pushed back fiercely.

"They have only one objective: shirk their responsibility for their own poor epidemic prevention and control measures," foreign ministry spokesman Geng Shuang said on Tuesday.

China's outbreak appears to be under control with no new deaths reported for 13 straight days and confirmed fatalities around 4,600 -- although much doubt has been cast on whether the numbers are accurate.

In Latin America, Brazil has emerged as a new hotspot with 5,000 deaths so far, while nine prisoners were killed in riots at a Peruvian jail after two inmates died from COVID-19.

Scientists are scrambling to develop treatments and a vaccine for the disease, with myriad studies under way -- including one from the US Department of Homeland Security into how ultraviolet radiation destroys the virus.

Trump raised eyebrows last week when he used his daily national press briefing to ask whether light could become a medical treatment.

While that research has not yet been published, Indonesians are soaking up rays like never before in the hope that the tropical country's plentiful sunshine will ward off the disease.

"I always avoided the sun before because I didn't want to get tanned," said Theresia Rikke Astria, a 27-year-old housewife in Indonesia's cultural capital Yogyakarta. "But I'm hoping this will strengthen my immune system," she added.

The government has been warning about the dangers of skin cancer and calling for novice sun-seekers to slap on protection.

Meanwhile Britain issued a warning of coronavirus-related syndrome emerging in children -- including abdominal pain and inflammation around the heart.

"What I would also stress is that it is rare. Although it is very significant for those children who do get it, the number of cases is small," said Health Secretary Matt Hancock.