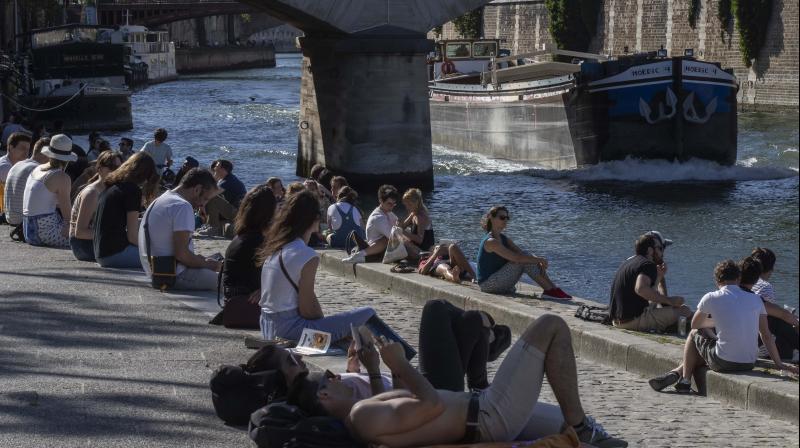 People stroll along the Seine river banks in Paris. (AP)

Paris: France will allow restaurants, bars and cafes to reopen from June 2, though with more restrictions in Paris than elsewhere, Prime Minister Edouard Philippe said on Thursday as he announced the next phase in easing the country’s coronavirus lockdown.

The government is also lifting a nationwide 100 km (60-mile) travel restriction and will reopen beaches and parks from next week as it seeks to resuscitate the euro zone’s second biggest economy ahead of the summer tourism season.

“Freedom will become the rule, bans the exception,” Philippe said in a televised address.

More than 28,600 people have died of COVID-19 in France. On Thursday the death toll rose by less than 100 for the eighth day running.

The spread of the virus is slowing quicker than hoped for and Paris is no longer deemed a “red zone” coronavirus hot spot, Philippe said. But danger still lurked and there was no room for complacency, he added.

The greater Paris region is now an “orange” zone, meaning it is not as virus-free as almost all other regions designated “green”, and the easing of restrictions will be more cautious.

Across the country, restaurants, cafes and bars will have to ensure a minimum one-metre (three-foot) gap between tables and all staff must wear face masks. In “orange” zones they will only be permitted to open outdoor seating areas.

“Those who don’t have a terrace are the fall guys,” he said. “We’re exhausted by an invisible enemy that has broken our morale.”

The rebound of France’s hospitality sector will depend in part on how quickly tourists return. Nearly 90 million foreign tourists visited France in 2018, making it the most visited country in the world.

Philippe said he was in favour of removing border restrictions within Europe’s Schengen area without quarantine rules from June 15.

France and its European neighbours have been progressively easing unprecedented restrictions on public life in the past month, desperate to revive battered economies but mindful of unleashing a second wave of infections.

A ban on gatherings in public places of more than 10 people remains in place for now, and major sporting events will also be suspended until at least June 21, Philippe said.

Cinemas will be allowed to open from June 22 unless the spread of the virus quickens once again.

Health Minister Olivier Veran said the virus’ reproduction rate, known as the “R” rate, is below 1 across almost the whole country, meaning that on average each infected person is infecting less than one person and so the epidemic is regressing.

A contact-tracing app, allowing health authorities to identify people who have been exposed to a COVID-19 carrier, will go live on June 2, Philippe said.