The secessionists say a referendum on Oct 1 gave them a mandate for independence. 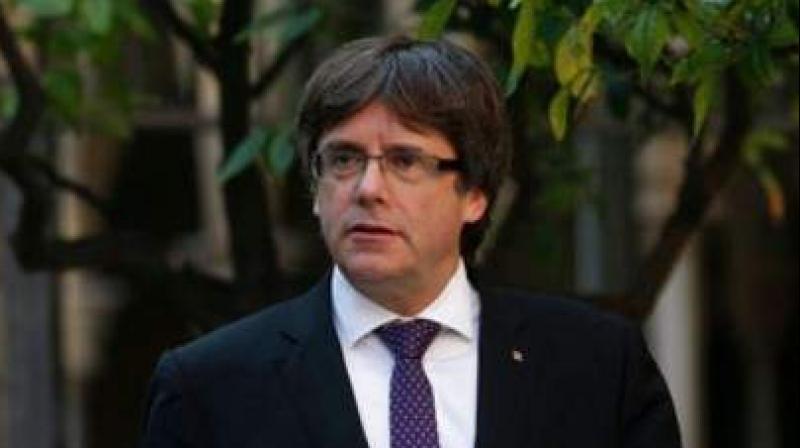 Madrid: Sacked Catalonian president Carles Puigdemont on Saturday called for peaceful “democratic opposition” to the central government’s takeover of the region following its unilateral declaration of independence from Spain.

Puigdemont, whose regional government was dismissed by Spanish Prime Minister Mariano Rajoy on Friday, accused Madrid of “premeditated aggression” against the will of the Catalans.

Rajoy removed Puigdemont, took over the administration of the autonomous region and called a new election after Catalonia’s parliament declared itself an independent nation on Friday.

The bold if to all appearances futile action marked a potentially dangerous escalation of Spain’s worst political crisis in the four decades since its return to democracy.

“It’s very clear that the best form of defending the gains made up until now is democratic opposition to Article 155,” Puigdemont said in a brief statement he read out in the Catalan city of Girona, referring to the legal trigger for the takeover.

But he was vague on precisely what steps the secessionists would take as the national authorities are already moving into Barcelona and other parts of Catalonia to enforce control.

Spanish government spokesman Inigo Mendez de Vigo said it would welcome Puigdemont’s participation in the regional elections it has called for Dec 21.

“I‘m quite sure that if Puigdemont takes part in these elections, he can exercise this democratic opposition,” Mendez de Vigo told Reuters TV in an interview.

European countries, the United States and Mexico have rejected the Catalan declaration and expressed support for Spain’s unity.

Puigdemont signed the statement as President of Catalonia, demonstrating he did not accept his ousting.

“We continue persevering in the only attitude that can make us winners. Without violence, without insults... and also respecting the protests of the Catalans who do not agree with what the parliamentary majority has decided,” he said.

The secessionists say a referendum on Oct 1 gave them a mandate for independence. However, less than half of eligible voters turned out for the ballot, which Madrid declared illegal and tried to stop.

Opinion polls show that more than half of the 5.3 million people eligible to vote in the wealthy northeastern region, which is already autonomous, do not want to break from Spain.

But emotions are running high and the next few days will be tricky for Madrid as it embarks on enforcing direct rule.

Calling a new regional election is something of a gamble by Prime Minister Mariano Rajoy as it could increase the numbers of pro-independence supporters in a new parliament. But Mendez de Vigo said it would give Catalans the final say about how they felt.