This is the fifth straight day that the number of daily deaths has hovered around 300, with the lowest figure since March 20 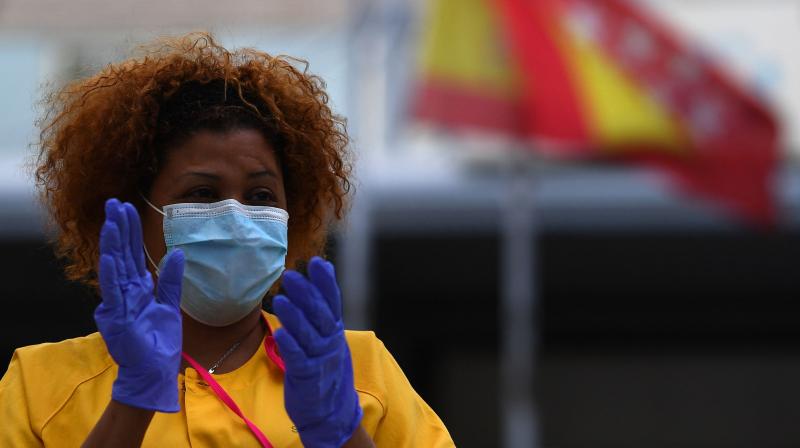 A healthcare worker applauds in return as she and her colleagues are cheered on outside the Gregorio Maranon Hospital in Madrid. (AFP)

Madrid: Spain on Thursday counted another 268 people who have died from the coronavirus, the lowest daily number since March 20 as the country prepares to ease its tough lockdown measures.

The figures from the health ministry bring the total number of deaths from the pandemic in Spain to 24,543 -- the fourth-highest after the United States, Italy and Britain.

This is the fifth straight day that the number of daily deaths has hovered around 300 and it is the lowest daily figure since March 20 when 235 fatalities were reported.

The number of confirmed cases of COVID-19 stands at 213,435, although the government recently began counting in its total only patients who test positive using a technique known as PCR. Over 112,000 people have been declared cured of the disease.

Health experts believe Europe's largest outbreak peaked on April 2 when 950 people died over 24 hours. Since then, the toll has been gradually dropping.

Spain's nearly 47 million people have since March 14 lived under one of the strictest virus lockdowns in the world, with only adults authorised to leave home to buy food, medicine or walk the dog.

The lockdown was prolonged last week until May 9 but prime minister Pedro Sanchez on Tuesday unveiled a plan to gradually begin easing the restrictions in four phases that should be completed by the end of June.