Prime Minister Boris Johnson said that ``to the best of our knowledge, the incident has been contained'' but that details were still emerging. 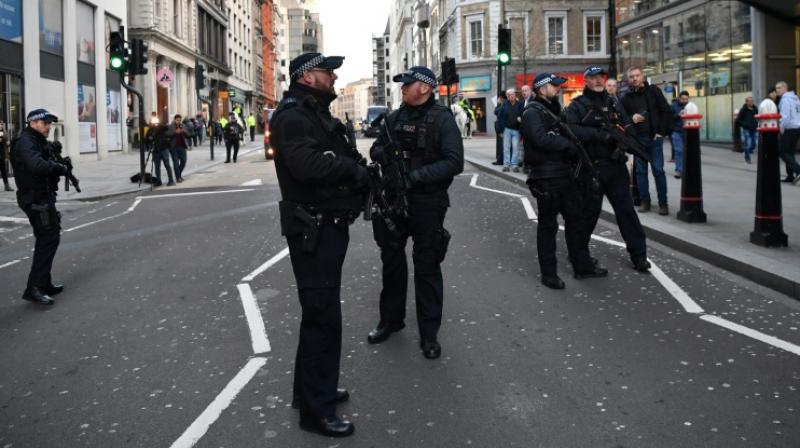 The violence erupted two-and-a-half years after a van and knife attack in the same area killed eight people and less than two weeks before Britain holds a national election. (Photo: AFP)

London:  A man wearing a fake explosive vest stabbed several people Friday in London, killing two in what police are treating as a terrorist attack before being tackled by members of the public and then fatally shot by officers on London Bridge, officials said.

Metropolitan Police Chief Cressida Dick said two stabbing victims had died and three injured people were being treated in hospitals. Health officials said one of the injured was in critical but stable condition, one was stable and the third had less serious injuries.

Dick said police were working ``at full tilt'' to determine whether anyone else was involved in the attack. She would not say whether the suspect was known to police, noting it was ``a very fast-moving, dynamic investigation; we will keep you updated."

The violence erupted two-and-a-half years after a van and knife attack in the same area killed eight people and less than two weeks before Britain holds a national election. The main pollical parties temporarily suspended campaigning in London as a mark of respect.

Prime Minister Boris Johnson said that ``to the best of our knowledge, the incident has been contained'' but that details were still emerging.

Metropolitan Police counterterrorism chief Neil Basu said the suspect appeared to be wearing a bomb vest but it turned out to be ``a hoax explosive device."

Basu said officers were keeping ``an open mind as to any motive.''

Dick, the police chief, said officers were called just before 2 p.m. to Fishmongers' Hall, a conference venue at the north end of London Bridge. The pedestrian and vehicle bridge links the city's business district with the south bank of the River Thames.

Cambridge-based prison-education organization Learning Together was holding an event there Friday, and the University of Cambridge said it was ``gravely concerned'' about students, staff and alumni who might have been caught up in the attack.

Minutes after the report of the stabbing, witnesses saw a man with a knife being wrestled to the ground by members of the public on the bridge before armed-response officers shot him dead.

One video posted on social media showed two men struggling on the bridge before police pulled a man in civilian clothes off a black-clad man on the ground. Gunshots followed. Another depicted a man in suit and overcoat holding a long knife that apparently had been taken from the attacker.

Other images showed police, guns are drawn, pointing at a figure on the ground in the distance.