Italy to let passengers off cruise ship after coronavirus scare 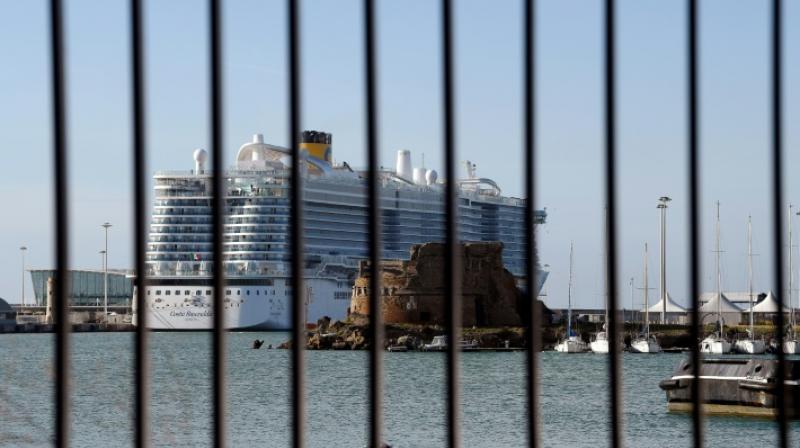 The Costa Crociere liner carrying some 7,000 people was in a lockdown at the Italian port of Civitavecchia. AFP Photo

Thousands of stranded tourists were free to disembark from a cruise ship at an Italian port after authorities said two Chinese passengers feared to have the coronavirus tested negative Thursday.

Italy's institute for infectious diseases examined samples taken from a Chinese woman ill with a fever, as well as her travelling companion, and both were negative for coronavirus, the health ministry said.

It was not immediately clear whether passengers, who had been stranded for 12 hours, would disembark from the Costa Smeralda cruise ship on Thursday or Friday.

Some 1,000 new passengers were due to board the ship in Civitavecchia and 1,400 were due to permanently disembark.

The news came as the UN health agency declared an international emergency over the deadly coronavirus from China, which reported its biggest single-day jump in coronavirus deaths.

Costa Cruises said a 54-year old woman from Macau "was placed in solitary confinement in the on-board hospital last night with her travel companion".

Some 750 other Chinese passengers were on board and all appear to be in good health.

Costa Cruises was offering to pay for food and hotels for some 1,140 people who had been due to go ashore at the Civitavecchia port near Rome, and the ship was to set sail again Friday, Italian media said.

"People are irritable and exasperated," one passenger who was on board with his wife said.

"They've given us rooms to use as a base while we wait, but there's no privacy," he said.

The Smeralda, the company's flagship and the fifth-largest cruise ship in the world, had sailed in from Palma de Mallorca as part of a one-week trip in the western Mediterranean.

Italy's Prime Minister Giuseppe Conte earlier said the government was "not worried, but vigilant and cautious".

The couple flew in to Milan from Hong Kong on January 25, before getting on board at Savona in northern Italy, according to media reports.

The ship also stopped at Marseilles and Barcelona, as well as Parma de Mallorca, according to an itinerary on its website.

It had been due to sail for La Spezia in north Italy late Thursday, but would skip that stop and head straight for Savona, the media said.

An initial plan to disembark those who had been due to leave the ship Thursday morning had been put on hold after Civitavecchia mayor Ernesto Tedesco protested.

"Are you mad? Who gave you the order to disembark? I'll take you all to court," he shouted at officials after racing to the port in his Fiat 500, according to the Repubblica daily.

Silvio Brusaferro, president of the Italian national health institute, said that all suspected cases in Italy so far had turned out to be false alarms, but the health service was "ready should any cases of infection emerge".

Beijing has taken extraordinary steps to halt the spread of the virus, including effectively quarantining more than 50 million people in Wuhan and surrounding Hubei province.

The pathogen is believed to have emerged in a market that sold wild game, and spread by a Lunar New Year holiday season in which hundreds of millions of Chinese travel domestically or abroad.