The protests were organised by Baloch National Movement (BNM) (UK-zone) on the occasion of the International Day of the Disappeared. 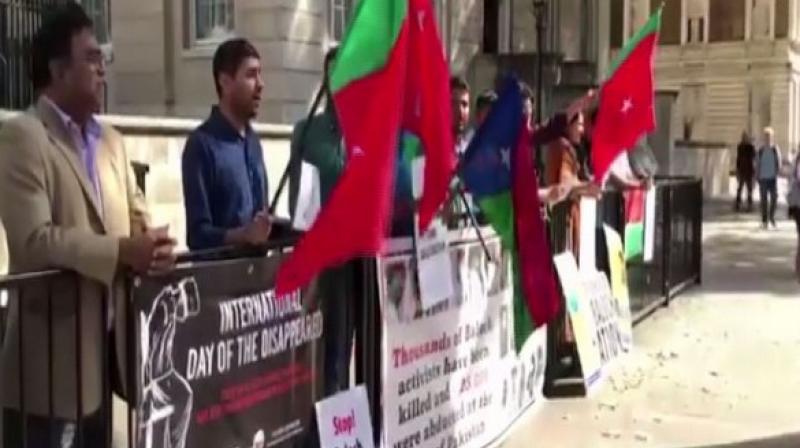 London: Baloch political activists on Friday gathered outside British Prime Minister Boris Johnson's house at 10 Downing Street to seek his immediate intervention for the release of thousands of Baloch activists languishing in detention centres in Pakistan.

The protests were organised by Baloch National Movement (BNM) (UK-zone) on the occasion of the International Day of the Disappeared. Demonstrators raised slogans against Pakistani Army for abducting, torturing and killing Baloch political activists. Shouts of Pakistani Army a "terrorist army" were heard during the protests.

"Baloch activists are facing the worst kind of brutality by the Pakistan forces. They are abducted, tortured, and killed. We are here today to let the world know what is happening with the Baloch people," said BNM leader Hakeem Baloch.

The BNM submitted a memorandum to British PM, urging the UK government to halt any financial aid to Pakistan and pressurise the country for the safe release of Baloch people, who have been forcibly disappeared at the hands of the Pakistani Army.

The memorandum noted that more than 20,000 human rights campaigners, educationists, journalists, students, lawyers, and political activists have disappeared in Pakistan, while another 6,000 have been tortured/murdered in custody.

"UN working groups, various local and international human rights organisations and even Pakistani judiciary believe Pakistani military and their secret services are directly involved in these disappearances. However, to this date, neither a single culprit has been tried by the judicial courts nor any form of international pressure has been exerted to halt these crimes," the memorandum read.