While in Saudi Arabia, Angela Merkel had said she does not believe there can be a military solution to the war. 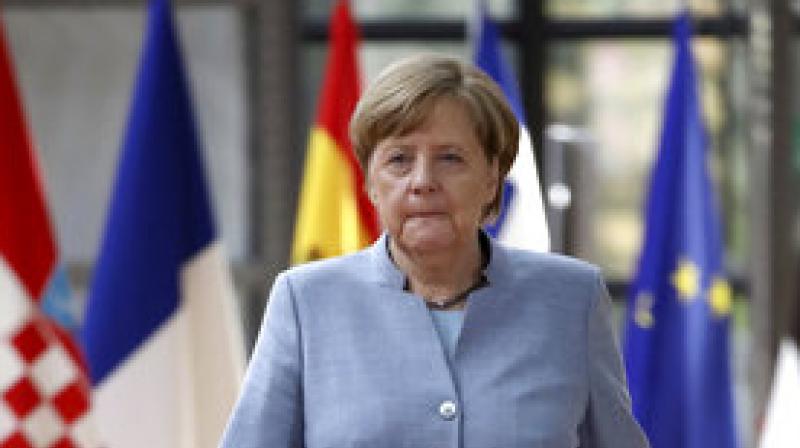 Merkel said Berlin is offering diplomatic support aimed at resolving the Yemen conflict and has been in contact with UN Secretary-General Antonio Guterres about its proposal. (Photo: AP)

Dubai: Germany has offered diplomatic help to try to end the war in Yemen, Chancellor Angela Merkel said on Monday as she ended a two-nation Gulf tour taking in the Arab world's largest economies with a stop in the United Arab Emirates.

Merkel arrived in the seven-state federation following a visit to neighbouring Saudi Arabia, where she held talks with King Salman and other senior leaders that touched on regional conflicts as well as women's inequality and other human rights issues.

She said Berlin is offering diplomatic support aimed at resolving the Yemen conflict and has been in contact with UN Secretary-General Antonio Guterres about its proposal, according to a transcript of her remarks provided by her office.

"Germany has offered to support this UN process with its own diplomatic possibilities," she was quoted as saying. "That has met with the approval of Saudi Arabia. We will now move ahead with the necessary coordination with the UN secretary-general."

A Saudi-led coalition backed by significant Emirati support has been bombing and battling Yemeni rebels for more than two years in support of the impoverished country's internationally recognised government.

Shiite powerhouse Iran supports the rebels, known as Houthis, and the Sunni-ruled Gulf states view the fight as a way to limit Iran's involvement in their backyard.

While in Saudi Arabia, Merkel had said she does not believe there can be a military solution to the war, which has killed more than 10,000 civilians and created a humanitarian crisis in what was already the Arab world's poorest country.

The UN recently said some 18.8 million people in the country need humanitarian help or protection. The German leader was greeted by Crown Prince Sheikh Mohammed bin Zayed Al Nahyan upon her arrival on Monday in the Emirati capital, Abu Dhabi. The crown prince is the half-brother of the country's ailing president and his presumed successor.

Emirati officials did not allow foreign journalists based in the country to witness Merkel's visit. German officials have said Merkel would press Gulf rulers to do more to take in refugees and provide humanitarian relief for those fleeing conflict in Muslim-majority countries. Germany has provided refuge to hundreds of thousands of people from Syria, Iraq and Afghanistan in recent years.

Trade is high on Merkel's agenda too. Her delegation includes prominent German business leaders looking to strengthen ties with the country's two largest trading partners in the Middle East.

Her meetings in the Emirates, which include the Mideast commercial hub of Dubai, would include discussion of a free-trade agreement between the Gulf states in the European Union and "how we can move ahead and intensify our economic relations still further," she said.