A crowd of new arrivals waited in the cold to register their names with Syrian authorities and receive food, mattresses and blankets. 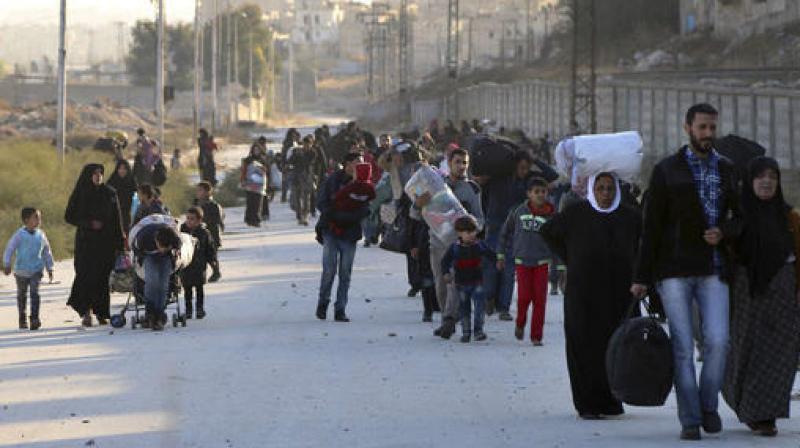 Jibrin, Syria: Fawwaz al-Ashaari stayed on in rebel-held east Aleppo through the loss of his eldest son and his home. But as fighting got closer, he joined a mass exodus to government territory.

Some 20,000 civilians have made the same journey since Saturday as a government offensive on rebel-held areas has intensified. Another 30,000 have sought refuge in a Kurdish-controlled enclave between the city's two sectors.

"I can't lose any more," Ashaari told AFP in a temporary shelter in the government-held town of Jibrin, about 10 kilometres (six miles) north of Syria's battleground second city.

His back propped up against his battered black suitcase, Ashaari said he now had a single wish.

"The rest of my children only want to live in safety. They have seen death several times. I want them to know life."

Ashaari and his family lived in the Sakhur neighbourhood, where they had endured more than four years of bombardment and siege since the rebels seized it in mid-2012.

But as government troops and allied fighters overran it this week, they set off on the treacherous journey across the front lines.

They are among hundreds of displaced now housed in the three concrete blocks that make up the Jibrin reception centre.

A crowd of new arrivals -- mostly women and children -- waited in the cold to register their names with Syrian authorities and receive food, mattresses and blankets.

Dozens of others huddled under charcoal-grey blankets, trying to keep warm and dry as rain drizzled outside.

More than 250,000 civilians stayed on in east Aleppo under rebel rule.

After the government launched a renewed offensive to retake the whole city earlier this year, it announced several humanitarian pauses backed by its main ally Russia to allow civilians to flee.

But until the past week, only a handful left.

East Aleppo had been under siege for four months without access to food or medicine, and an AFP correspondent saw Russian soldiers among those serving meals to the desperate civilians arriving in Jibrin.

Families queued for plates of hot rice, meat, bread, eggs and lentils prepared by chefs from Syria, Russia and the government's other main ally Iran.

Watery soup was ladled out of a large vat in the back of a truck bearing a Russian flag.

Nawwara, 14, counted the number of people ahead of her in the queue, impatient to taste her first proper meal in months.

Her mother had decided just the previous evening that they would leave their home in a rebel-controlled district of Aleppo.

"She just said: 'We're leaving,'" Nawwara said, recalling the scene from her bedroom window as her neighbours scurried out of their homes in the winter darkness.

Other families were relieved to finally be warm, after months without access to heating fuel.

"I could warm up for the first time," said Abdel Latif, 56, who arrived in Jibrin with his wife and other family members on Wednesday.

"It's been three years since we had gas at home," he said, edging closer to a bonfire.

Many were still exhausted from their terrifying escape on foot through the war zone.

"Our journey on foot lasted six hours. They were the longest hours of my life," the 55-year-old said.

Civilians arriving in Jibrin are greeted by aid groups and the Syrian Arab Red Crescent, which conducts medical checks and transports any urgent cases to hospital.

But for surrendering rebel fighters, the reception process is more complicated.

Syrian soldiers record their names and take their identification papers to check whether they completed their compulsory military service.

In the early years of Syria's five-and-a-half-year civil war, many of those joining the rebels were deserting soldiers.

"Men who fought with rebel groups must clear up their status with the government, and the state will then take the necessary measures," said Aleppo's deputy governor, Abdel Ghani Kassab.

One former rebel fighter, who identified himself only as Ahmad, 40, from the Sakhur district, acknowledged he had been reluctant to surrender.

"I was afraid that the army would detain me... but I didn't have much choice," he said.