A WHO official said the govt removed most medical material from UN vehicles including surgical kits, insulin and dialysis equipment. 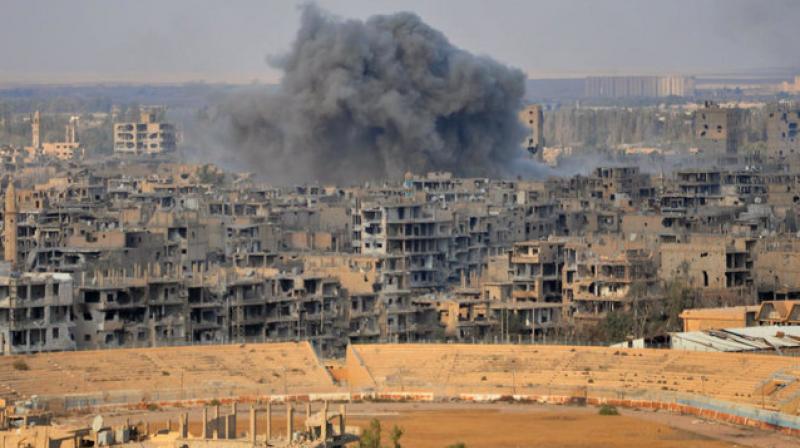 Beirut/Geneva: An aid convoy began to cross into Syria’s eastern Ghouta on Monday, bringing the first relief to the besieged enclave since one of the deadliest government assaults of the seven-year war began two weeks ago, but stripped of vital medical supplies.

A senior UN official accompanying the convoy said he was “not happy” to hear loud shelling near the crossing point into eastern Ghouta despite an agreement that the aid would be delivered under peaceful conditions.

“We need to be assured that we will be able to deliver the humanitarian assistance under good conditions,” Ali al-Za’tari said at the crossing point.

A World Health Organization (WHO) official said government authorities had removed most medical material from UN vehicles, preventing surgical kits, insulin, dialysis equipment and other supplies from reaching the enclave of 400,000 people.

Za’tari said the convoy had been scaled back from providing food for 70,000 people to providing for 27,500.

The United Nations says Syria has agreed to let it bring the rest of the food for the full 70,000 in a second convoy in three days.

“The convoy is not sufficient,” said Za’tari.

President Bashar al-Assad vowed on Sunday to continue a military push into the biggest remaining opposition stronghold near Damascus, saying the offensive did not contradict five-hour ceasefires arranged each day by his main ally Russia.

A wider, full ceasefire backed by the UN Security Council has not come into effect during the campaign, which began with massive government air strikes two weeks ago and has continued in recent days with a ground assault.

The Syrian Observatory for Human Rights, a Britain-based war monitor, said the death toll from the offensive had exceeded 700 people in two weeks of intense bombardment on the densely populated region of farmland and towns.

Pro-Assad forces have made sudden advances into eastern Ghouta in recent days, capturing a third of the area, the Observatory said, and bringing them close to cutting it in two.

Late on Sunday, a rebel official said factions in eastern Ghouta were working together to prepare to retake lost ground.

The area has been under siege by government forces since 2013, and the United Nations had feared that people inside were running out of food and medicine even before the major assault began two weeks ago.

In comments broadcast by state television on Sunday, Assad dismissed Western statements about the humanitarian situation in eastern Ghouta as “a ridiculous lie”.

Moscow made a similar case at the UN Human Rights Council in Geneva: “The media atmosphere is saturated with lies,” Russian diplomat Alexei Goltyaev said. “As a result we see debates and votes that are entirely removed from the actual situation on the ground.”

Monday’s convoy of trucks sent by the United Nations, the International Committee of the Red Cross and the Syrian Arab Red Crescent passed the last Syrian government checkpoint and began to drive into the rebel-held area, a Reuters witness said.

The UN’s Za’tari said it would take “many hours” to offload the aid and it might be “well after nightfall” before it could return. Syrian army and Russian soldiers stood on the government-held side of the crossing point, and empty buses waited to evacuate any civilians who might leave eastern Ghouta.

The UN’s aid agency OCHA said on Sunday it aimed to deliver a convoy with 46 truckloads of health, food and nutrition supplies to eastern Ghouta.

A WHO official said that Syrian government officials had rejected 70 percent of the supplies it had prepared for Monday’s convoy, including “all trauma (kits), surgical, dialysis sessions and insulin”.

Russia’s military said the rebels which control eastern Ghouta had agreed to let civilians leave in return for aid.

Assad and Russia have both repeatedly accused the rebels of stopping civilians fleeing eastern Ghouta, a charge denied by the insurgents, who say people there fear arrest, torture or forcible conscription if they cross into government areas.

Concern for civilians in eastern Ghouta helped prompt a UN Security Council resolution a week ago demanding a full ceasefire across all of Syria.

Veto-wielding member Russia accepted the resolution, but says it does not apply to the rebel groups in eastern Ghouta, which Moscow regards as members of terrorist groups banned by the United Nations. Moscow has instead established daily humanitarian pauses from 9 a.m. to 2 p.m.