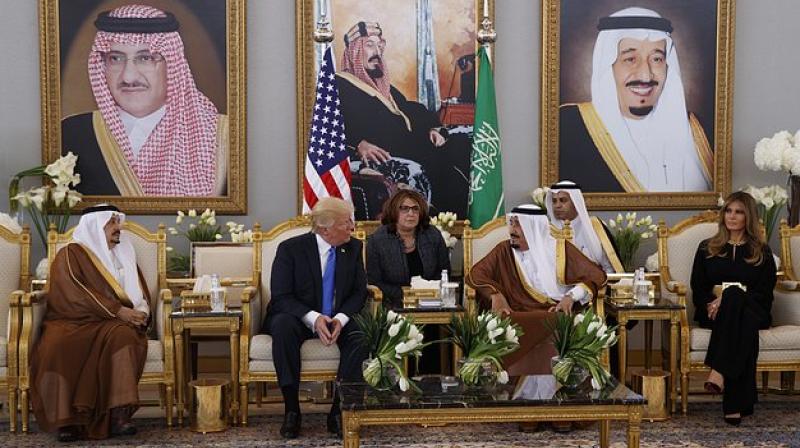 US President Donald Trump with Saudi Arabia King Salman after a welcome ceremony at the Royal Terminal in Riyadh. (Photo: AP)

Riyadh: The Arab coalition has said it has suspended Qatar's troops participation in an ongoing war in Yemen.

The Guardian quoted the official Saudi Press Agency, as saying that Saudi Arabia had decided to sever diplomatic and consular relations with Qatar "proceeding from the exercise of its sovereign right guaranteed by international law and the protection of national security from the dangers of terrorism and extremism".

Western officials have also accused Qatar of allowing funding of Sunni extremists like Al-Qaida's branch in Syria. The snapping of the Saudi-led Arab coalition ties with fellow Gulf Arab state Qatar was due to the news that was carried by Qatar's news agency which Doha alleged to have been hacked.

Qatar's government claimed its official websites had been hacked and categorically denied in which the country's leader expressed support for Iran.

The Washington Post reported that Online footage of Qatari state television's nightly newscast from Tuesday showed clips of Sheikh Tamim at the ceremony with the anchor not mentioning the comments, though a scrolling ticker at the bottom of the screen had the alleged fake remarks.

They included calling Hamas "the legitimate representative of the Palestinian people," as well as saying Qatar had "strong relations" with Iran and the United States.

Further said "Iran represents a regional and Islamic power that cannot be ignored and it is unwise to face up against it," the ticker read at one point. "It is a big power in the stabilization of the region." The alleged hack happened early on May 24th and hours later, the website of the Qatar News Agency still was not accessible.

The fake article quoted Sheikh Tamim as calling Iran an "Islamic power" and saying Qatar's relations with Israel were "good" during a military ceremony. Doha denied all the comments and said it was the victim of a "shameful cybercrime."

Egypt, Bahrian, UAE joined Saudi Arabia in snapping all their ties with Doha .

This situation is a repeat of 2014, when several Gulf countries recalled their Ambassadors from Doha over its support for Muslim Brotherhood.