Some rebel groups have agreed to negotiated surrenders but on Wednesday evening the remainder walked out of talks with a Russian delegation. 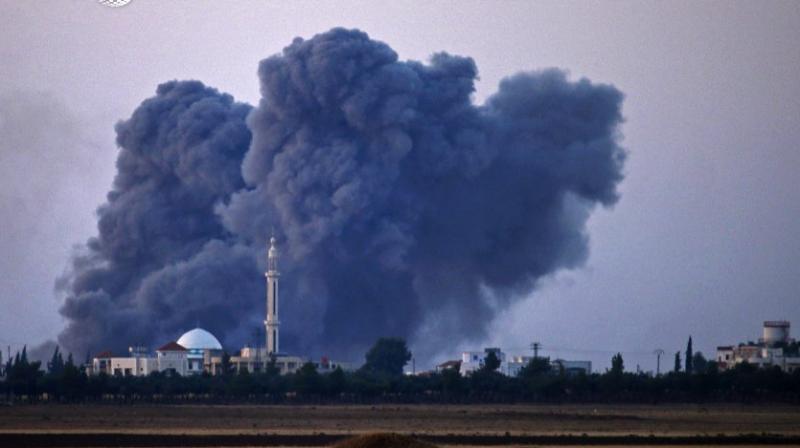 The intensity of the bombardment allowed government forces to seize control of a security checkpoint on the Jordanian border for the first time in more than three years, the monitoring group said. (Photo: AFP)

Daraa: The Syrian government and its Russian ally pounded rebel-held areas of the southern province of Daraa on Thursday with the heaviest air strikes of a two-week-old offensive.

"Hundreds" of missiles and barrel bombs were unleashed before dawn by both Syrian and Russian aircraft, after talks on rebel surrenders broke down on Wednesday, the Syrian Observatory for Human Rights said.

The intensity of the bombardment allowed government forces to seize control of a security checkpoint on the Jordanian border for the first time in more than three years, the Britain-based monitoring group said.

Observatory director Rami Abdel Rahman said the bombardment was an "attempt to make the rebels back down after they refused to subject themselves to the Russian terms for a ceasefire."

Some rebel groups have agreed to negotiated surrenders but on Wednesday evening the remainder walked out of talks with a Russian delegation saying they would not agree to hand over their heavy weapons.

Rebel sources said Moscow had demanded rebels hand over all their heavy arms in one go but that opposition fighters wanted to do so in several phases.

Moscow has also reportedly refused requests from some rebels for safe passage to opposition-held territory in other parts of Syria, as was done in Eastern Ghouta and Aleppo.

Samer Homssi, who had fled to the outskirts of Daraa with his wife and four children, described a fierce onslaught of regime air strikes and shelling.

"The bombardment has not stopped for one moment since the announcement that the negotiations failed," the 47-year-old, whose family was taking shelter in a grove of olive trees, told AFP.

"We are living here in the olive trees, afraid of everything, the shelling, the insects, with no water to drink or any medical services nearby. The situation is very difficult," he added.

The Observatory said air strikes were ongoing, including on the town of Tafas in the northwest of Daraa province and on towns and villages near the Jordanian border.

Six civilians, including a woman and four children, were killed in the town of Saida, which regime ground forces were trying to take, it said.

An AFP correspondent on the edge of the rebel-held south of the city of Daraa, the divided provincial capital, said the bombing of rebel neighbourhoods was the most intense since the launch of the Russian-backed offensive on July 19.

Damascus has unleashed similar bombardment of rebel-held towns elsewhere in Syria in the past that have delivered negotiated surrenders which allowed it to retake swathes of territory. More than 30 towns in the south have already agreed to surrender, expanding the regime's control of Daraa province to around 60 percent, double what it held before the start of the offensive.

Daraa is considered the cradle of the 2011 uprising against President Bashar al-Assad's rule that triggered Syria's devastating civil war.

Nearly 150 civilians have died since the assault began, according to the Observatory. The southern offensive has also displaced between 270,000 and 330,000 people, according to the United Nations, many south to the border with Jordan or west to near the Israeli-occupied Golan Heights.

Both countries have kept their borders closed, despite mounting calls by human rights groups to let Syrians escape to safety.

World powers have criticised the operation for violating a ceasefire announced last year by Washington, Amman and Moscow, but that has not halted the blitz.

The UN Security Council will hold a closed-door emergency meeting on the offensive on Thursday.