It is currently not clear if the deaths were caused by chlorine or another agent such as sarin. 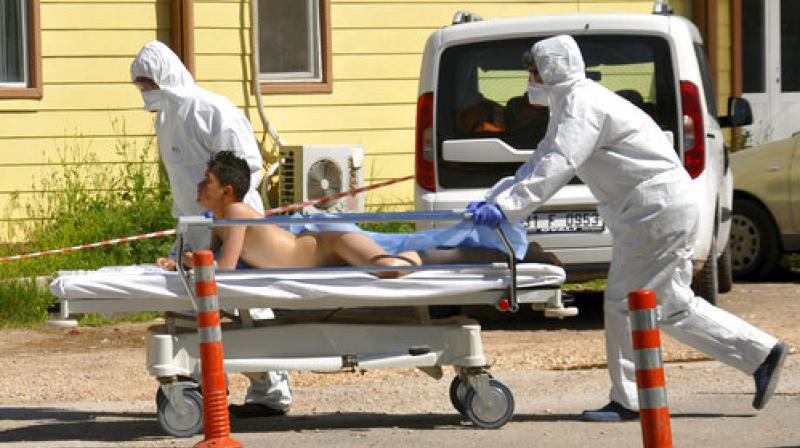 If confirmed, the attack on April 4 2017 would be one of the worst chemical attacks in Syria in six years of civil war. (Photo: AP)

Idlib: Dozens of people have been killed in a suspected chemical weapon attack in Syria, according to a war monitoring group. Videos and pictures have been posted online, which activists and medics claim show evidence of people dying from asphyxiation.

One news agency report suggested at least 11 of the dead were children. There have also been reports that one of the hospitals treating the victims was attacked.

The Syrian Observatory for Human Rights said that those killed in the town of Khan Sheikhun, in the central province of Idlib, died from the effects of some sort of gas. If confirmed, the attack on April 4 2017 would be one of the worst chemical attacks in Syria in six years of civil war.

It is currently not clear if the deaths were caused by chlorine or another agent such as sarin. Both count as chemical weapons, which are illegal. Syria supposedly destroyed all of its sarin stockpiles and production facilities when it joined the Chemical weapon Convention – although evidence to the contrary has emerged.

Russia strongly denies that the Syrian air force is using chlorine. But the Syrian air force is. This has been categorically proven in a series of reports by the Organisation for the Prohibition of Chemical Weapons-United Nations Joint Mission OPCW-UN, which Russia begrudgingly allowed to take place. (Moscow then went on to question the methodology of those reports, despite accepting their findings in relation to Islamic State.)

But even if we accept Russian concerns with regard to official attribution, the scale of publicly available evidence that dozens of attacks have been carried out by Syrian helicopters makes assertions to the contrary embarrassing.

The official attribution process is still limping on, and proving very effective under the circumstances. But it is unclear whether it will survive long enough to investigate allegations over this latest attack. Russia have been sceptical about the obvious need to extend the mandate for the OPCW-UN joint mission. Further to this they, along with Iran, have sort to block the communication and formal adoption of previous findings.

There are of course no clean hands in this. Russia has felt cornered at various points by the United States, which, during the Obama administration, linked punishment of Assad for war-crimes with the goal of regime change.

However, if there had been no pressure from Western powers it is difficult to see how any investigatory process into the use of chemical weapons after 2013 would ever have been launched.

After this latest atrocity, we may see a change in US rhetoric compared to previous responses. If Washington does address the issue publicly, it may state that it will be for the Syrian people to investigate and prosecute these crimes at some point in the future. If Donald Trump comments, he may also imply that he will put pressure on his friend and counterpart in Moscow.

Away from the White House however, if it is confirmed that sarin was used by the Syrian government, Israel may also feel it has to respond, especially if it does not feel supported by the US.

If it becomes clear that Syria has not just retained some capacity of sarin, but it is also using it, Israel may feel justified in responding to an apparent escalation of threat. This would then create an awkward situation for the US at a time it is looking to work with Russia more closely.

In response to this latest attack, a United Nations Security Council meeting is likely soon. But there seems little reason to believe there will be any incentive for Russia to support any form of drastic action. Indeed, in the context of ongoing peace talks there seems cause for most of the major players to bury the issue.

There is then a need to place pressure on all governments to support evidence gathering processes – including the Joint OPCW-UN attribution process. This is not enough, but at the moment would appear to be one of the few hopes of eventually ensuring that those who are committing such war crimes are eventually held accountable.

(This article first appeared in The Conversation Global)