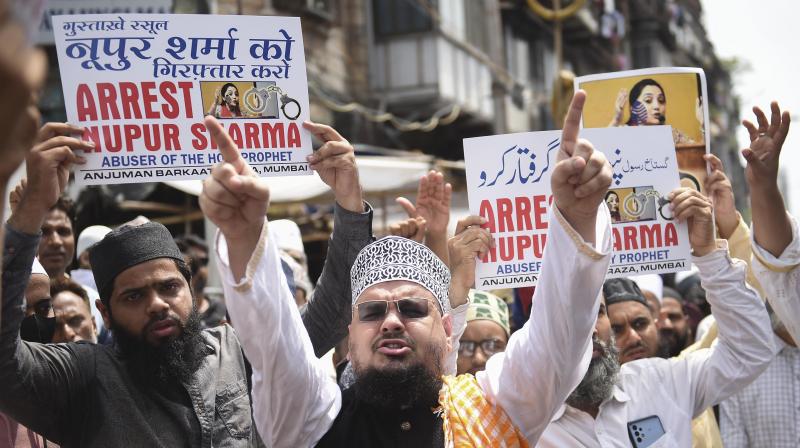 New Delhi: Indonesia, Saudi Arabia, the United Arab Emirates, Jordan, Bahrain and Afghanistan joined the chorus on Monday in condemning the derogatory utterances of now-sacked BJP spokesperson Nupur Sharma on the Prophet, even as they welcomed the BJP’s decision to suspend her from the party. Meanwhile, Pakistan and the Organisation of Islamic Cooperation (OIC) also waded into the controversy and criticised India. New Delhi, however, hit back at both Islamabad and the OIC, lambasting Pakistan as a “serial violator of minority rights” and attacking the OIC for its “mischievous, narrow-minded comments and divisive agenda”.

In a statement on Monday, Saudi Arabia said: “The (Saudi) ministry of foreign affairs expresses its condemnation and denunciation of the statements made by the spokeswoman of India’s ruling BJP… and reaffirms its permanent rejection of prejudice against the symbols of the Islamic religion... The ministry of foreign affairs also welcomes the action taken by the BJP to suspend the spokeswoman from work and the ministry reiterates the Kingdom’s position calling for respect for beliefs and religions.”

In a separate statement, the General Presidency for the Affairs of the Grand Mosque in Mecca and the Prophet’s Mosque in Medina on Monday condemned the “insulting statements” by the spokesperson of the BJP.

The UAE, condemning the statements by the BJP spokeswoman, affirmed its “firm rejection of all practices and behaviours that contradict moral and humanitarian values and principles”. The UAE also called for the “necessity of respecting religious symbols and not violating them, confronting hate speech and violence and strengthening the joint international responsibility to spread the value of tolerance and human coexistence and to prevent any practices that would inflame the religious feelings of followers of different religions”.

Indonesia, the world’s most populous Muslim nation, strongly condemned what it called “unacceptable derogatory remarks” against the Prophet by two Indian politicians. “This message has been conveyed to the Indian ambassador in Jakarta,” the foreign ministry tweeted.

Jordan also “condemned in the strongest terms” the offensive remarks of the BJP leader, who has been suspended from the party’s primary membership.

In Oman, Sheikh Khalifa Ali Al Harthy, foreign ministry undersecretary for diplomatic affairs, met India’s ambassador Amit Narang and expressed his country’s condemnation of the insulting remarks made about the Prophet. Mr Harthy noted that such comments and incidents do not serve peaceful coexistence among people of different religions and only cause public outrage. He welcomed the BJP statement announcing the suspension of the leader who made the insulting remarks.

The secretary-general of the Gulf Cooperation Council, Nayef Falah M. Al Hajraf, also condemned, rejected and denounced the statements made by the spokesperson of the BJP against the Prophet. The GCC is a regional, inter-governmental, political, and economic union that consists of Bahrain, Kuwait, Oman, Qatar, Saudi Arabia, and the United Arab Emirates. Millions of Indians work in the GCC countries.

On their part, Bahrain, stressing the need to denounce any reprehensible insults, said: “The ministry of foreign affairs welcomed the decision of India’s Bharatiya Janata Party to suspend the party spokeswoman… The ministry of foreign affairs stressed the importance of respecting all religious beliefs, symbols and personalities and the concerted efforts of the international community to spread the values of moderation, tolerance and dialogue between religions and civilisations, to confront extremist ideas that feed sedition and religious, sectarian, or racial hatred.”

Following the criticism earlier on Sunday by Qatar, Kuwait and Iran, according to reports, the Taliban regime in Afghanistan also criticised the comments of the erstwhile BJP spokespersons.

The Maldives said it was “deeply concerned by the derogatory remarks made by some officials of the BJP”.

Lashing out at India, Islamabad summoned India charge d’affaires to the ministry of foreign affairs and conveyed Pakistan’s categorical rejection and strong condemnation of the derogatory remarks. “He was told that these remarks are totally unacceptable and have not only deeply hurt the sentiments of the people of Pakistan but of Muslims across the world… Pakistan is deeply concerned at the alarming rise in communal violence and hatred against the Muslims in India...” said the Pakistani statement.

Hitting right back at Pakistan, India retorted: “We have noted statements and and comments from Pakistan. The absurdity of a serial violator of minority rights commenting on the treatment of minorities in another nation is not lost on anyone. The world has been witness to the systemic persecution of minorities, including Hindus, Sikhs, Christians and Ahmadiyyas by Pakistan.”

The MEA said: “The Government of India accords the highest respect to all religions. This is quite unlike Pakistan, where fanatics are eulogised and monuments are built in their honour. We call on Pakistan to focus on the safety, security and well-being of its minority communities instead of engaging in alarmist propaganda and attempting to foment communal disharmony in India.”

Attacking the OIC, India said: “We have seen the statement on India from the general secretariat of the OIC. The Government of India categorically rejects the OIC secretariat’s unwarranted and narrow-minded comments... It is regrettable that the OIC secretariat has yet again chosen to make motivated, misleading and mischievous comments. This only exposes its divisive agenda being pursued at the behest of vested interests. We would urge the OIC secretariat to stop pursuing its communal approach and show due respect to all faiths and religions.”

New Delhi added: “The Government of India accords the highest respect to all religions. The offensive tweets and comments denigrating a religious personality were made by certain individuals. They do not, in any manner, reflect the views of the Government of India. Strong action has already been taken against these individuals by the relevant bodies.”

The controversy comes as the latest challenge to New Delhi to ensure its ties with both its key Arab friends and Iran as well as the larger Islamic world are not damaged.