Prime Minister Narendra Modi visited the cemetery on the last day of his visit to Israel. 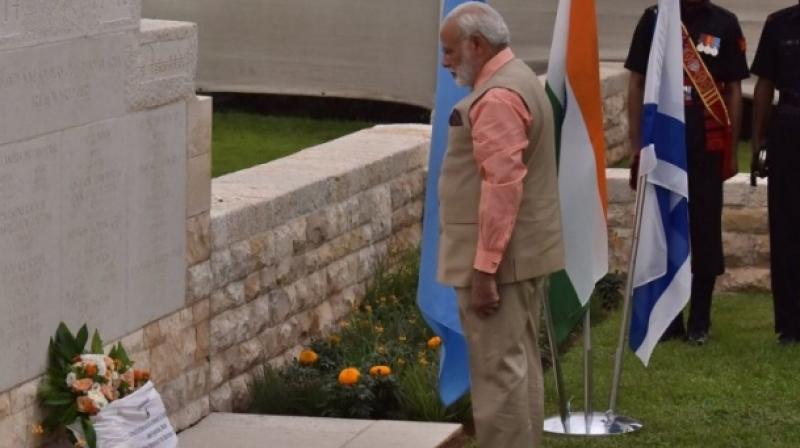 Before visiting the site, Modi said, "This is the final resting place for 44 of the Indian soldiers who sacrificed their lives during World War I to liberate the city." (Photo: MEA India Twitter)

Haifa (Israel): Prime Minister Narendra Modi on Thursday visited the Indian cemetery in the Israeli city of Haifa and paid homage to Indian soldiers who laid down their lives during the World War 1 while protecting the city from the powerful forces of the Ottoman Empire.

Modi visited the cemetery on the last day of his visit to Israel. "This is the final resting place for 44 of the Indian soldiers who sacrificed their lives during World War I to liberate the city," Modi had said before visiting the site.

The Indian Army commemorates September 23 every year as Haifa Day to pay its respects to the two brave Indian Cavalry Regiments that helped liberate the city following a dashing cavalry action by the 15th Imperial Service Cavalry Brigade.

Read: Modi, Israel PM upgrade ties; vow to do ‘much more together’

In the autumn of 1918, the Indian Brigade was a part of the Allied Forces sweeping northwards through Palestine in what is seen as the last great cavalry campaign in history.

Major Dalpat Singh (MC) is known in the annals of history as the 'Hero of Haifa' for his critical role in the Liberation of the city. He was awarded a military cross for his bravery.

In 2012, the municipality of Haifa decided to immortalise the sacrifices made by Indian soldiers, many of whom are buried in the cemetery here, by including the stories of their valiant efforts in school curricula.

The municipality also decided to organise a ceremony every year to commemorate the role of the Indian Army in liberating the city from Turks after almost 402 years.