Modi, Israel PM upgrade ties; vow to do ‘much more together’ 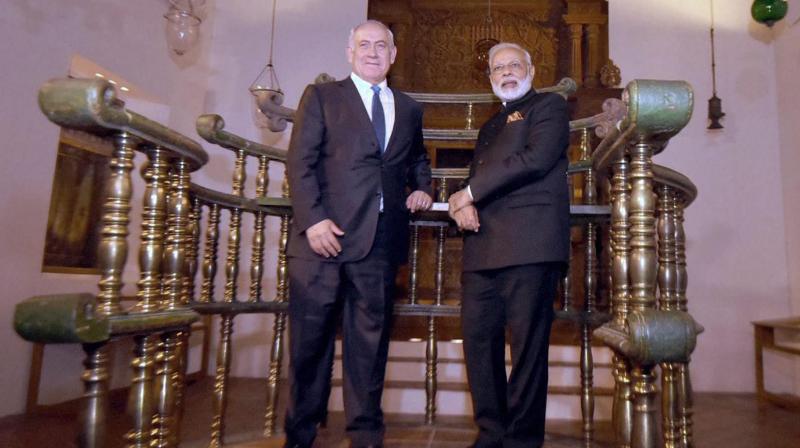 Prime Minister Narendra Modi and his Israeli counterpart Benjamin Netanyahu during their visit to Israeli museum to witness an exhibition on India-Jewish Heritage, in Jerusalem. (Photo: AP)

New Delhi: Signing seven agreements in the fields of space, science, agriculture and drinking water, visiting Prime Minister Narendra Modi and Israeli PM Benjamin Netanyahu on Wednesday elevated and broadened India-Israeli ties to the “strategic partnership” level with a vow to do “much more together” to combat growing radicalisation and terrorism. The two countries, in their joint statements, also pitched for “strong measures” against those financing and providing sanctuaries to terrorist groups.

There was, however, no direct mention of Pakistan in the joint statement, which India sees as the fountainhead of global terror, or Iran, about which Israel feels similarly. The seven pacts announced between India and Israel did not include defence, which is the fulcrum of the Indo-Israeli relationship.

India has acquired billions of dollars worth of sophisticated weaponry, platforms and equipment for its armed forces from Israel in the past decades.

In a powerful symbolic special gesture of just how terrorism had affected the two countries, Mr Modi earlier met Moshe Holtzberg, the Israeli child who was just two years old when he lost his parents in the 2008 Mumbai terror attacks carried out by Pakistani terrorists.

Mr Modi held extensive talks with his Israeli counterpart Benjamin Netanyahu on Wednesday, after which they agreed “to do much more together to protect our (the two nations’) strategic interests and also cooperate to combat growing radicalisation and terrorism, including in cyberspace”. The two also decided to elevate their relationship to a strategic partnership, foreign secretary S. Jaishankar said while briefing reporters in Israel. Cooperation on homeland security will be strengthened between the two countries, he added.

Read: People of Indian origin in Israel to get OCI card

“India and Israel live in complex geographies. We are aware of strategic threats to regional peace and stability. India has suffered firsthand the violence and hatred spread by terror. So has Israel. Prime Minister Netanyahu and I agreed to do much more together to protect our strategic interests and also cooperate to combat growing radicalisation and terrorism, including in cyberspace. We also discussed the situation in West Asia and the wider region. It is India’s hope that peace, dialogue and restraint will prevail,” Mr Modi said.

The joint statement said: “Recognising that terrorism poses a grave threat to global peace and stability, the two Prime Ministers reiterated their strong commitment to combat it in all its forms and manifestations. They stressed that there can be no justification for acts of terror on any grounds whatsoever. The leaders asserted that strong measures should be taken against terrorists, terror organisations, their networks and all those who encourage, support and finance terrorism, or provide sanctuary to terrorists and terror groups. They also underscored the need to ensure terrorist organisations do not get access to any WMD or technologies. Both leaders also committed to cooperate for the early adoption of the Comprehensive Convention on International Terrorism (CCIT).”

It added: “Recognising its centrality for development, India and Israel agreed to establish a ‘Strategic Partnership in Water and Agriculture’. This will focus on water conservation, waste-water treatment and its reuse for agriculture, desalination, water utility reforms and the cleaning of the Ganga and other rivers using advanced water technologies. It will also include the reinforcement and expansion of the existing Centres of Excellence (COE) under the stewardship of the Israeli ministry of foreign affairs and the ministry of agriculture of India to promote commercially viable business models involving Farmer Producer Organisations (FPOs); the provision of quality planting material; and the transfer of post-harvest technical knowhow and market linkages involving the private sector through PPP, B2B & other models. The two leaders also agreed on the establishment of a joint working group to steer this partnership.”

“India admires the success of your people in overcoming adversity to advance, innovate and flourish against all odds. I am honoured to be in Israel on this extraordinary visit. In our modern journey, our paths have been different, but our belief in democratic values and economic progress has been a shared pursuit,” Mr Modi said.

The joint statement further said: “Both leaders welcomed the ongoing cooperation between the Israel Space Agency (ISA) and Indian Space Research Organisation (Isro)... They also encouraged the two space agencies to further enhance the growing relationship for mutual benefit. The two leaders acknowledged that the recent launching by Isro of an Israeli nano satellite is an important milestone in this arena.”