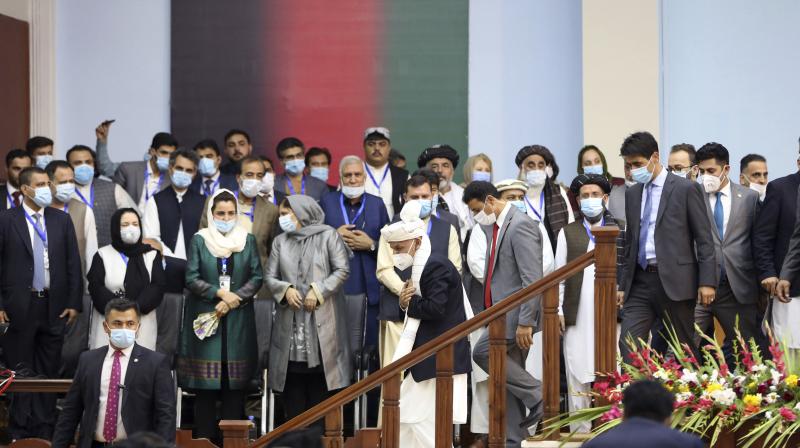 Kabul: A traditional council met Friday in Afghanistan’s capital to decide whether to release a final 400 Taliban prisoners, the last hurdle to starting negotiations between Kabul’s political leadership and the Taliban under a peace deal with the U.S.

The negotiations are a critical step toward lasting peace in Afghanistan. The talks will decide what a peaceful Afghanistan might look like, what constitutional changes will be made, how the rights of women and minorities will be protected and the fate of the tens of thousands of heavily armed men on both sides of the conflict. Besides Taliban fighters, warlords in Kabul maintain thousands of armed militias loyal to them.

The Taliban in a statement Friday rejected the Kabul gathering, saying it had no legal status.

A statement by U.S. Secretary of State Mike Pompeo issued late Thursday made it clear that the 400 prisoners had to be released if peace talks with the Taliban were to move forward.

“We acknowledge that the release of these prisoners is unpopular,” Pompeo said. “But this difficult action will lead to an important result long sought by Afghans and Afghanistan’s friends: reduction of violence and direct talks resulting in a peace agreement and an end to the war.”

The traditional council, or loya jirga, will cost an already poor Afghanistan $4.5 million. It is being attended by several thousand people even as the Health Ministry earlier this week said as many as half of Kabul’s residents have been infected by the coronavirus. Official figures of nearly 37, 000 confirmed cases are a woeful under reporting of the infection rate, according to the health minister. He said 10 million people — a third of Afghans — have been infected.

In his statement, Pompeo said the Taliban had agreed to reduce violence once talks begin.

“The Taliban have also committed to significantly reduce violence and casualties during the talks where the parties will decide on a political road map to end the long and brutal war and agree on a permanent and comprehensive ceasefire,” he said.

Since signing the agreement with Washington in February, the Taliban have not attacked U.S. and NATO troops, but have continued to wage war with the Afghan National Security Forces. The U.S. and NATO have also begun withdrawing some troops in line with the agreement.

The February peace deal calls on the Taliban to guarantee Afghanistan will not be used as a staging arena by terrorist groups to attack the United States or its allies. The withdrawal of U.S. and NATO troops hinges on the Taliban meeting those commitments and not on a positive outcome to negotiations between the Taliban and Kabul’s political leadership.

The intra-Afghan negotiations that Washington had hoped would begin in March have been delayed by the reluctance of Kabul to release the Taliban prisoners. The deal called on Kabul to free 5,000 Taliban and the insurgent group to free 1,000 government and military personnel.

President Ashraf Ghani eventually freed all but 400 of the prisoners while insisting on a council to decide whether they could be released, saying their crimes were too serious for him to decide on alone.

Abdullah Abdullah, who was made head of the High Council for National Reconciliation to end political infighting in Kabul, took over the leadership of the traditional council from its previous head, Abdul Rasul Sayyaf, a warlord and close ally of Ghani’s.

Sayyaf, a deeply religious conservative and inspiration for the Philippine terrorist group Abu Sayyaf, urged participants “to not create obstacles to peace,” without elaborating.

Ghani told participants at the opening of the council they must decide “one way or another” on the 400 Taliban prisoners because the Taliban have made clear that if the prisoners are released within three days, they will begin negotiations but if not there will be none.

He offered no instruction saying simply: “It is time to decide.”

The council is scheduled to end Sunday but Ghani said “it would be great if you decide today or tomorrow,” paving the way for an early start to negotiations with the Taliban.