If you cross our 'red line' again, there will be retaliation: Russia, Iran warn Trump

Vladimir Putin and Hassan Rouhani said in a phone call that aggressive US actions against Syria violated international law. 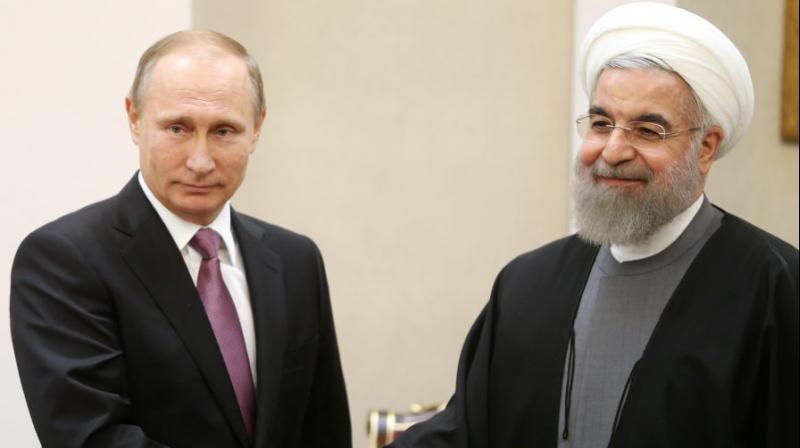 The two leaders said they were ready to deepen cooperation to fight terrorism. (Photo: AP)

Amman: A joint command center made up of the forces of Russia, Iran and militias supporting Syrian President Bashar al-Assad on Sunday said the US strike on a Syrian air base on Friday crossed "red lines" and it would respond to any new aggression and increase its support for its ally.

The United States fired dozens of cruise missiles at a Syrian air base on Friday from which it said a deadly chemical weapons attack had been launched earlier in the week, escalating the US role in Syria and drawing criticism from Assad's allies including Russia and Iran.

"What America waged in an aggression on Syria is a crossing of red lines. From now on we will respond with force to any aggressor or any breach of red lines from whoever it is and America knows our ability to respond well," said the statement published by the group on media outlet Ilam al Harbi (War Media).

US Secretary of State Rex Tillerson, meanwhile, blamed Russian inaction for helping fuel the chemical weapons attack it had reacted to, saying Moscow had failed to carry out a 2013 agreement to secure and destroy chemical weapons in Syria.

He said the United States expected Russia to take a tougher stance against Syria by rethinking its alliance with Assad because "every time one of these horrific attacks occurs, it draws Russia closer into some level of responsibility."

Rebels and residents in northwestern Idlib province said jets believed to be Russian conducted eight raids on Sunday on the town of Khan Sheikhoun where the chemical attack took place but no casualties were reported.

Raids hit several other rebel-held towns including Saraqeb and Sarmin in the province, where the rebels and activists said incendiary bombs were dropped.

The death toll from an air strike on Saturday on the rebel-held town of Urum al-Joz in Idlib province rose to 19 people, including six children, activists and residents said.

In the southern city of Daraa, jets believed to be Russian escalated strikes on Free Syrian Army (FSA) and jihadist groups on Saturday and Sunday in an attempt to roll back their gains in the Manshiya district where battles have been raging for nearly two months.

Putin, Rouhani speak
Russian President Vladimir Putin and Iran's Hassan Rouhani said in a phone call that aggressive US actions against Syria were not permissible and violated international law, the Kremlin said on Sunday.

The two leaders also called for an objective investigation into an incident involving chemical weapons in Syria's Idlib and said they were ready to deepen cooperation to fight terrorism, the Kremlin said in a statement on its website.

Syrian army forces had been losing ground across the country until Russia intervened militarily in September 2015, propping up Assad and protecting its own interests in the region.

Assad has also drawn heavily on foreign Shi'ite militias sponsored by Iran, led by Lebanon's Hezbollah group, for his most important gains since the Russian intervention.

The joint command center also said the presence of U.S troops in northern Syria where Washington has hundreds of special forces helping the Syrian Democratic Forces (SDF) to oust Islamic State was "illegal" and that Washington had a long-term plan to occupy the area.

The regional alliance said the U.S. cruise missile strikes on a Syrian base which Washington said was involved in a chemical attack that killed dozens of civilians would not deter their forces from "liberating" all of Syrian territory.

In Iran, Supreme Leader Ayatollah Ali Khamenei said the U.S. missile strike was a "a strategic error, and a repeat of the mistakes of the past," the state news agency IRNA reported.

"The Islamic Republic has shown that ... it does not back off and its people and officials ... do not retreat in the face of threats," said Khamenei.

Many Syrians opposed to Assad's rule consider Lebanon's Hezbollah and Iranian-backed troops as occupiers seeking to drive out mainly Sunni Syrians from the areas they live in. They hold Iran and its allies responsible for the displacement of millions outside the country.

They also see Russia as a foreign occupier whose relentless aerial bombardment of rebel-held areas has led to thousands of civilian casualties.

Some accuse Moscow of applying a "scorched-earth policy" that targets hospitals, schools and residential areas more than frontlines to break the resolve of the anti-Assad insurgency.