Across the border in more sparsely populated areas of Iraq, the health ministry said eight people had died and several hundred were injured. 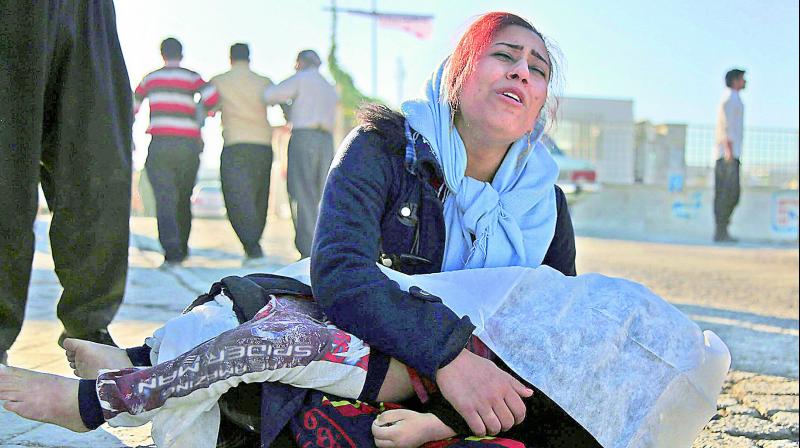 A woman mourns as she holds the body of her daughter, who died in the earthquake. (Photo: AP)

Tehran: Teams of Iranian rescuers dug through rubble in a hunt for survivors on Monday after a major earthquake struck the Iran-Iraq border, killing at least 415 people and injuring thousands.

The 7.3-magnitude quake rocked a border area 30 km south-west of Halabja in Iraqi Kurdistan at around 9.20 pm on Sunday, the US Geological Survey said.

Many people would have been at home when the quake hit in Iran’s western province of Kermanshah, where authorities said it killed at least 407 people and injured 6,700.

Across the border in more sparsely populated areas of Iraq, the health ministry said eight people had died and several hundred were injured. However, Iraq’s Red Crescent put the toll at nine with more than 400 injured.

As dusk approached on Monday, tens of thousands of Iranians were forced to sleep outside in the cold for a second night as authorities scrambled to provide them with aid.

Some had spent Sunday night outdoors after fleeing their homes in the mountainous cross-border region, huddling around fires at dawn as authorities sent in help.