Syrians stuck in and near Aleppo as evacuation deal halts

Residents of Madaya sat outside rows of coaches in a bus garage in government-held Aleppo, waiting to move onto Idlib. 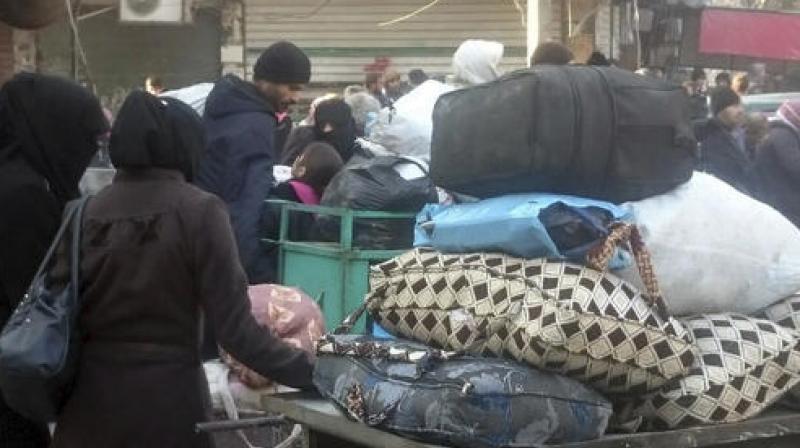 Beirut: Thousands of Syrians were stuck in and around Aleppo on Saturday as a deal to evacuate people from two Shi'ite villages in return for Sunni rebels and their families leaving two towns near Damascus halted, a war monitor and activists said.

The British-based Syrian Observatory for Human Rights said the problem was that rebels from Zabadani, one of the towns included in the deal, had not yet been granted safe passage out.

The agreement is one of several over recent months that has seen President Bashar al-Assad's government take back control of areas long besieged by his forces and their allies.

In the latest deal, hundreds of rebels and their families left the town of Madaya near Damascus, and were taken on buses to the government-held city of Aleppo. From there they will travel to Idlib province, an insurgent stronghold.

In return, pro-government fighters and residents from the Shi'ite villages of al-Foua and Kefraya in Idlib, both surrounded by rebels, left the area and reached Aleppo's outskirts.

On Saturday, those from Madaya sat outside rows of coaches in a bus garage in government-held Aleppo, waiting to move onto Idlib, pictures sent by a pro-opposition activist showed.

Meanwhile residents from the Shi'ite villages were still waiting in insurgent territory on Aleppo's outskirts to enter the city, the Observatory and a witness said.

The pro-opposition activist said insurgents blamed the delay partly on the fact that a smaller number of pro-government fighters had left the Shi'ite villages than was agreed.

At the transit point outside Aleppo, where the buses from al-Foua and Kefraya were waiting, one resident said he was not yet sure where he would live.

"After Aleppo I'll see what the rest of the group is doing, if there are any preparations. My house, land and belongings are all in al-Foua," Mehdi Tahhan said.

"We had no choice"

A Madaya resident, speaking from the bus garage inside Aleppo, said people had been waiting there since late on Friday night, and were not being allowed to leave.

"There's no drinking water or food. The bus garage is small so there's not much space to move around," Ahmed, 24, said.

"We're sad and angry about what has happened," he said. Many people felt that they had been forced to leave, he said.

"There was no other choice in the end - we were besieged inside a small area in Madaya."

Syria's opposition says the evacuation deals, which include areas of Aleppo and a district in the city of Homs, amount to forced displacement of Assad's opponents from Syria's main urban centers in the west of the country.

The agreements are also causing demographic changes, they say, because those who are displaced are mostly Sunni Muslims.

Syria's population is mostly Sunni. Assad is from the Alawite religious minority, often considered an offshoot of Shi'ite Islam.

He has been backed militarily by Russia, and by Shi'ite fighters from Iran and the Lebanese Hezbollah group in Syria's six-year-old conflict.

Assad has the military advantage over rebels in the west thanks to Russia's intervention in 2015, although the insurgents are still fighting back and have made gains in some areas.